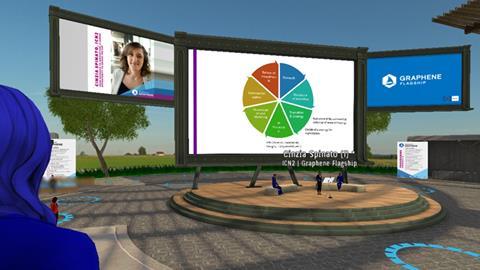 The rise of the virtual chemistry conference

In the wake of the coronavirus pandemic, online talks and poster sessions are moving to the mainstream 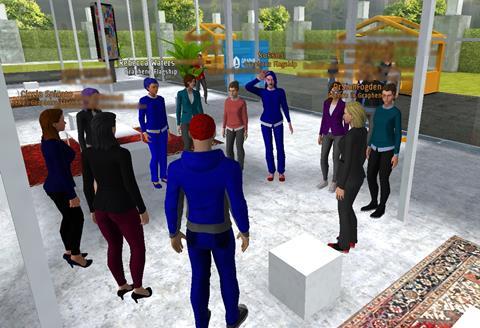 On 18 March, Sian Fogden donned a dark blue suit and red shoes and headed straight to Women in Graphene, a conference she was co-ordinating, to join her colleagues at the help desk. Only the conference was in a 3D virtual environment. The dark blue suit was worn by Fogden’s online avatar.

Women in Graphene was among hundreds of scientific conferences that were cancelled as Covid-19 spread across the world. While many meetings were postponed, some proactive organisers instead moved to new online venues. In the process, they may have inadvertently helped to usher in a new era of science communication.

The show must go on

After exploring their options, the organisers of Women in Graphene chose Virtway Events’ 3D conferencing platform to create a real-life conference feel for its 80 attendees. Participants each made an avatar, which could walk around and interact with other people. The virtual venue simulated a physical conference environment, with a conference hall for presentations and a networking room for social interactions. ‘It’s a bit like a gaming system,’ says Fogden. ‘So if you’d ever played the Sims, then you would feel quite comfortable with it.’

The two-day event involved multiple talks and a workshop on negotiation skills. ‘The beauty of this system meant that people can interact on a one-to-one or group level in a way that just isn’t possible with something like Microsoft Teams or Zoom,’ says Fogden. This was important, because ‘a big thing that we really value at Women in Graphene is the networking and social interaction, and enabling people to make connections’.

As labs are shut and research placed on hold, virtual symposia play an important role in helping scientists to stay connected with their community. Help has been forthcoming from researchers who have more experience hosting online events. Huw Davies, a chemistry professor at Emory University in the US and director of the National Science Foundation-funded Center for Selective C-H Functionalization (CCHF), has been organising virtual symposia focusing on C-H functionalisation research since 2015. On top of these, CCHF will be holding additional digital symposia over the next few weeks in collaboration with the organic chemistry division of the American Chemical Society (ACS).

While these digital fora attract the whole range of scientists – graduate students, professors and industrial chemists – from around the globe, Davies hopes the symposia will especially help students, for whom lab work normally provides a large part of their daily engagement. ‘We hope this will give them a bit of an outreach that isn’t listening to the news, but actually allows them to connect to the science that they are all involved in,’ says Davies.

It’s not just talks that are moving online, but poster sessions too. The RSC Twitter poster conference began in 2015 as an initiative of analytical scientists, and has since expanded to include other branches of chemistry as well. In the 2020 event held on 3 March, 795 participants from 59 countries presented their posters across 12 categories. Holly M Fruehwald, a PhD candidate in materials science at Ontario Tech University, participated in – and benefitted enormously from – the event this year, winning second prize in the energy and sustainability category. ‘I really enjoyed the questions [on my poster] because they were thought-provoking and even gave me new ideas for experiments or analysis of my samples,’ she says.

Excited to present my work on a water oxidation reaction (WOR) catalyst made by depositing Ruthenium nanoparticles on graphene oxide. Our materials are stable & active towards the WOR in acidic media. Check out how active👀👇 #RSCPoster #RSCMat #RSCEnergy pic.twitter.com/57xAC3BI7m

For one researcher, the online response to her poster has pushed her career into new avenues. At the 2019 poster event, Zoë Ayres, analytical scientist and visiting research fellow at the University of Warwick, presented a poster on the mental health issues experienced by PhD students. The poster garnered more than 2000 retweets and won her the audience participation prize. ‘This encouraged me to become a visible mental health advocate,’ says Ayres. Since then, she has created a series of posters on mental health issues in academia and posted them on Twitter, and often writes articles on the subject.

Wanted to enter a poster this year on something that I think is very important and needs to be talked about more. #mentalhealth during a PhD, so here's my entry #RSCPoster #phdlife #phdchat #TimetoTalk pic.twitter.com/8tfPHtEKe6

Inclusivity was a prominent consideration for chemistry researcher Angela Grommet and her colleagues from the National Institute of Standards and Technology, US, when they decided to take their now-cancelled ACS spring meeting symposium on molecular capsules online, independently of ACS. ‘This is something that kind of frustrated us about real life in-person conferences: the people who really needed to hear the talks like first-year graduate students – people who are trying to figure out what they want to do with their career and what they want to do in their research – aren’t the types of people who can afford to go to conferences,’ says Grommet, who is a Zuckerman STEM leadership postdoctoral fellow at the Weizmann Institute of Science, Israel.

The symposium took place on 22 and 23 March, with approximately seven talks in each session. 45% of the audience were graduate students, 38% postdocs, and 11% were other early career scientists, and 5% mid-late career scientists. ‘It means that we were doing a really good job of including people who may not have been able to come to the in-person ACS conference,’ says Grommet.

Jacopo Tessarolo, a postdoc at the Guido Clever Lab in Technische Universität Dortmund in Germany, jumped on to the opportunity to speak at the virtual symposium. ‘It was a little bit strange to talk and not have any immediate feedback from the hall noise or looking at the faces of the people,’ says Tessarolo. However, he notes that scientists can still connect after talks over social media and emails.

Organised through a platform called Blackboard Collaborate Ultra, each Global Inorganic Discussion Weekend 2020 (GIDW 2020) event features three talks – a 40-minute presentation by an established scientist and two 20-minute talks by those earlier in their career – followed by a Q&A session. The inaugural event on 29 March had over 200 attendees, despite minimal Twitter advertisements and less than a week of planning. In fact, it took off so well that they organised more events throughout April.

Drover and Chitnis set up the events in part to experiment with the virtual format. ‘Physical conferences are very difficult for people to attend, especially if they have children or if they’re in remote areas,’ says Chitnis. ‘We can figure out if this is a viable model that could actually be either a complement to or an alternative to the physical conference model, which is [also] environmentally terrible.’ Here, Chitnis is referring to the tremendous amount of travel scientists have to undertake to attended numerous meetings ever year.

Devon McGrath, a PhD candidate in chemistry at Memorial University of Newfoundland in Canada, appreciated that the organisers of GIDW 2020 gave speaking opportunities to both senior and early-career researchers. Moreover, he notes, ‘throughout my PhD, I have been to four in-person conferences and have found that often established researchers and graduate students stay within their respective circles. Virtual conferences can somewhat remove those barriers.’

Chitnis and Drover have found the events easy to organise, and have been able to only select a handful of speakers from among the people who are interested in speaking. ‘If I was invited to present a session at such an event, I would happily put it on my CV,’ says Drover, referring to the calibre of speakers at GIDW. ‘Being able to describe your science to 200 people from all over the world is an incredibly powerful motivator.’ Davies has also been successful in getting the top researchers in C-H functionalisation research for the CCHF virtual symposium series. He says it’s easier for top professors to commit to an-hour long engagement on their computer than long-distance travel for regular meetings.

Despite being mostly free, inclusive and accessible, Chitnis says online symposia sometimes lack the spontaneity that occurs when people discuss chemistry over lunches or drinks. ‘With a napkin from your pocket and a pen, you start growing something,’ he explains. ‘When you have something structural, it’s very nice to see it and quickly draw it and modify it on paper, and then take that back to a lab and think more about it.’

Virtual conferences also present technical challenges that the scientific community is still navigating, such as the phenomenon of Zoom bombing, where Zoom meetings are gatecrashed by strangers. Moreover, there a mixed feelings about the additional anonymity available to virtual attendees. During the Q&A round at the virtual molecular capsule symposium, the audience had the option to ask the questions themselves or to remain anonymous and have the moderators ask their questions. ‘I think that allowing people to do it anonymously encouraged more people to ask questions, which was great,’ says Grommet. ‘But giving them the option to do it anonymously made a lot of them ask questions anonymously, which made it seem less personal in the end.’

In the post-Covid era, virtual conferencing is likely to continue. ‘A lot of [participants of the molecular capsule meeting] said that they want to see this kind of thing more in the future, not just during this coronavirus crisis,’ says Grommet. The Women in Graphene network will also consider doing virtual meetings in between major conferences.

However, in-person conferences are unlikely to be entirely replaced. ‘We’re human beings, we’re social creatures, it’s nice to engage and interact with one another in person,’ says Drover. ‘I’m not sure that virtual symposia will ever take the place of an in-person conference.’ However, Chitnis speculates that big-name conferences will now integrate a virtual element into their events, allowing for more talks and abstracts to be accepted.

Despite its flaws and lack of human connection, the scientific community has warmed up to virtual conferencing. ‘Obviously the human contact and the chance to talk face to face, maybe during a coffee break, was missing,’ says Tessarolo. ‘[But] I must admit, I really loved to attend the conference from the couch with a cup of coffee or a glass of wine in the last hours.’