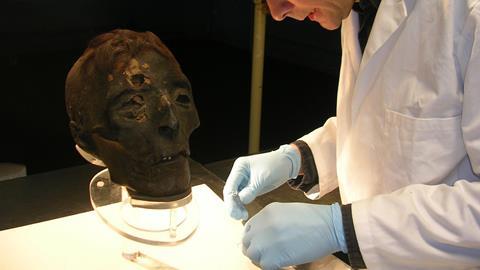 Why I mummified a taxi driver

‘We mummified a human being,’ states Stephen Buckley, an archaeological chemist from the University of York, UK. In late 2011, along with Egyptologist Joann Fletcher and a team of pathologists, Buckley mummified Alan Billis, a 61-year old taxi driver from Torquay who had died from lung cancer.

‘Torquay’s Tutankhamun’ had volunteered for a unique experiment – set up to determine how the ancient Egyptians mummified queens and pharaohs with salts, spices and waxes. For Buckley, immortalising Alan was the culmination of a 20-year quest to decipher the chemistry at the heart of ancient Egyptian life.

But the quest’s denouement stands in stark relief to where Buckley started his journey: the National Occupational Hygiene Service (NOHS). ‘They were one of the forerunners of looking after people’s health at work,’ he says. Following a college course in chemistry, Buckley spent around nine years at the NOHS analysing blood and urine samples for signs of chemical exposure and contamination using a wide range of analytical techniques, including gas chromatography mass spectrometry (GC–MS).

It gave Buckley the opportunity to refine his skills in analytical chemistry, but, ultimately, he wanted to go into academic research. ‘I left the company to become a mature student, aged 27 … with the idea of doing a PhD at the time in environmental chemistry.’

Death on the Nile

‘But in the meantime, while I’d left and done that, I’d actually gone to Egypt on holiday in 1990,’ recalls Buckley. The holiday was an excuse for the chemist to sate his appetite for ancient Egyptian history, something that had caught his attention back in secondary school.

Within a year, Buckley was back in Egypt to help excavate KV39 – the tomb of Amenhotep I – located in the Valley of the Kings. The enthusiastic early career academic used his seemingly unconnected experience in occupational hygiene and chemical expertise to analyse organic samples found in the tomb. Early on, Buckley became enamoured with the ancient Egyptians’ ability to preserve dead pharaohs, as well as the ingredients they used to push royalty into the afterlife. 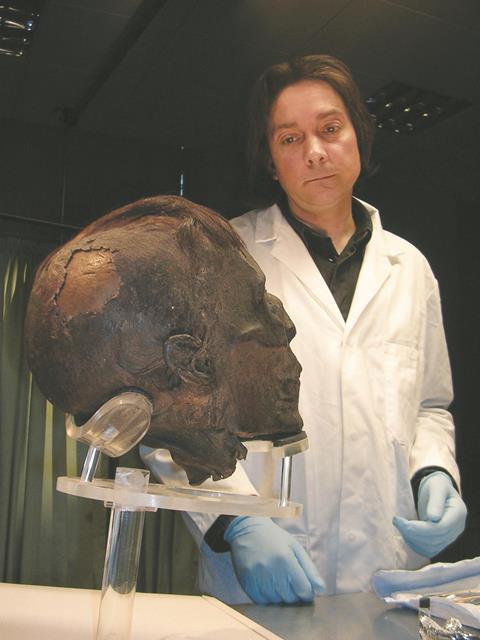 Buckley spent two seasons in Egypt, analysing these so-called resins in a bid to understand the chemistry behind mummification – all of this was before he’d even started his PhD. ‘What I felt was that the nature of the organic materials, the resins, the oils, the spices used in Egyptian mummification, weren’t really particularly well understood,’ he explains. ‘They were casually mentioned but with no real thought about what they were, why they were there or how they were working.’

Following a masters and PhD on these embalming agents, Buckley would deploy his expertise in GC–MS to great effect. But he was never limited by it. ‘I see it as a very valuable tool, and in many cases it can answer a lot of very interesting questions, but it is just a tool,’ he says. ‘I don’t feel as though I need to stay in my own area for fear of looking daft in front of my academic peers – that doesn’t worry me.’

This sense of adventure would be at the heart of one Buckley’s major discoveries. During the early 2000s, the chemist began to turn his attention to the ‘zenith’ of mummification – the 18th dynasty, a period that witnessed the reigns of rulers such as Tutankhamun and Amenhotep II. ‘We were doing a project called the KV35 project, just so happened to be pharaoh Amenhotep II’s tomb,’ remarks Buckley. ‘In there were these three mummified individuals and we were actually studying them using x rays.’

The team’s findings would rewrite the history books. At that time, Egyptologists believed embalmers encased dead pharaohs in a dry salt mixture known as natron, a mix of sodium carbonate, sodium bicarbonate, common salt and sodium sulfate, found in Wadi El Natrun – the ‘Natron Valley’. This was to remove moisture from the body to prevent bacterial decay.

‘From the x rays there looked like there was something unusual in the limbs of these individuals, a so-called “snowflake” effect,’ says Buckley. Such salt deposits in the tissues is impossible, however, if dry natron is used for mummification. The team realised the ancient Egyptians were in fact drying out their rulers in a salt water bath.

‘I was actually aware of a couple of very, very obscure papers published in 1908 to 1911 that had done the chemistry on the same mummies that we’d actually been x raying,’ explains Buckley. ‘The chemistry showed basically, that in the case of those mummies, a natron salt solution had been used.’

Such a bold claim that flew in the face of current wisdom would require some bold science to back it up. That’s when Buckley got the idea to demonstrate this ‘snowflake’ effect by bathing dead pigs in a natron bath. After hundreds of tests it appeared his theory was sound – snowflakes began to grow.

But there is a large difference between embalming a pig in a garden shed and attempting the same feat on a human being. Along with Fletcher and Peter Vanezis, a Home Office pathologist, Buckley set about advertising for a body donor with the help of the British Medical Association, a television company and the support of the Human Tissue Authority.

‘Alan Billis was the only person who came forward for this,’ he recalls. ‘He was a brilliant guy.’ Buckley goes on to explain that the process took nearly a decade, with the team ensuring all of the legalities were done in an appropriate and respectful way with Billis’s family.

Billis died in January 2011 from terminal lung cancer and the team set about mummifying him using all the knowledge they had gained from decades of research. Buckley first coated the body in pine resin, beeswax and sesame oil, before lowering Billis into a natron salt bath. Left to dry in the water bath for a month, Billis was subsequently wrapped in linen bandages coated in oils, resins and spices.

The experiment was an unprecedented success. After removing the wrappings around his head, Billis’s visage was perfectly preserved – the natron salt bath had worked. Billis now lies in the Gordon Museum of Pathology at King’s College London. 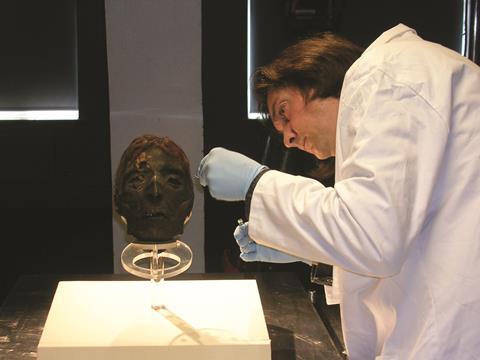 ‘It was clear to me that [the embalmers] had indeed used a natron salt solution to mummify the best of the best in Egypt at this time, so around the time of Tutankhamun,’ says Buckley. ‘They were very good scientists in terms of experiment and observation.’

But the archaeological chemist’s love affair with the ancient culture he describes as ‘quite good empirical chemists’ didn’t end with Billis. Since 2011, he has once again rewritten the history of mummification.

Deploying his trusty GC–MS, Buckley has been analysing linen wrappings from bodies found in the earliest ancient Egyptian cemeteries in central Egypt. His team has identified a complex embalming mixture of pine resin, plant extracts and animal fats. It was originally believed buried bodies were simply left to dry under the hot desert sand during this era. Finding these embalming mixtures has now pushed back the earliest recorded usage of resins in mummification by more than a millennium.

But the chemical analysis has also allowed Buckley to uncover a vast trade network stretching over 4000 miles during the early Pharaonic era. ‘In terms of inorganic material, they were using lapis lazuli from Afghanistan in Egypt certainly 3500–3400BC,’ says Buckley. ‘So quite early they had a network of trade links one assumes going over that distance.’

A series of connections is also vital for Buckley’s research. ‘Collaborating with very different people with all sorts of ideas and perspectives has been hugely valuable,’ he comments. ‘There’s no doubt that that has allowed a number of doors to have been opened that otherwise wouldn’t have been.’

His intense passion to carry out this vital work at the apex of archaeology, chemistry and history, is ultimately what has allowed him to turn the doorknob in the first place, however. It can all be traced back to that holiday in 1990. ‘My brain was thirsty for as much knowledge as possible on ancient Egypt,’ he remembers. ‘That thirst for knowledge and understanding is what has driven me.’

Although the knowledge Buckley has uncovered will be preserved in textbooks, it is also perfectly preserved in the legacy of a single human being. Speaking before his death in the award winning TV documentary, Mummifying Alan: Egypt’s last secret, Billis said of his grandchildren: ‘They’ll most probably tell somebody at school that my grandad’s a pharaoh – that’s my legacy I suppose.’