From strange simplicity to complex familiarity: a treatise on matter, information, life and thought 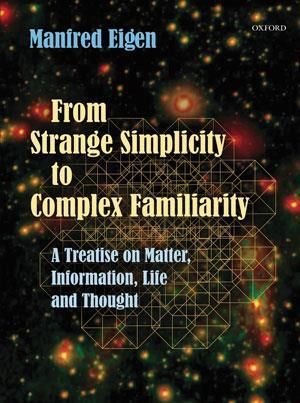 This is a truly remarkable book. It is also virtually impossible to review. It is essentially a 700-page technical paper, densely written and closely argued. It is simultaneously a meandering sojourn through Manfred Eigen’s extraordinary life, peppered with anecdotes (often delightful, never bragging) about the author’s meetings with past scientific giants, and as such it seems to issue from another age. It digresses for pages at a time on multidimensionality, black holes and Kurt Gödel’s theorem. None of this is intended as criticism; quite the reverse. But if you’re going to read it seriously, you’d better put aside a big chunk of time.

And I hope it does get read seriously, because it is packed with ideas that bigger brains than mine will need to ponder. The best I can do to intimate its thrust is to say that it attempts to place evolutionary theory on a rigorous basis, rooted in thermodynamics, self-organisation and information theory. It claims that natural selection, rather than being something that just happens, is a physical law, specifically a phase transition in information space: an inevitable consequence of the way information is organised. There are very few scientists alive who could attempt such a feat – who could claim the requisite knowledge of physics, chemistry, biology and mathematics. Fortunately Eigen, 1967 chemistry Nobel laureate, is one of them.

Does he succeed? I suspect that even the few people qualified to judge will need time to digest what is offered here before pronouncing on that. For my part, I could only enjoy the walk through the trees while accepting that I’d constantly lose sight of the wood. While pleased to see, for example, that Eigen gives a lot of space to Motoo Kimura’s random-drift theory of neutral evolution, I simply could not tell if in the end his statistical mechanics of evolution sufficiently acknowledges just what, historically speaking, a messy, ad hoc, contingent and compromised process it has been. Belief in an efficient, smooth-running evolutionary mechanism marred at least one previous attempt at something this grand: Stephen Wolfram’s A new kind of science. But Eigen seems to have a far deeper and more nuanced view of biological evolution.

Eigen’s writing makes few concessions to tinier minds, but it is unfailingly elegant. I doubt there will be a single reader who will not learn something new and profound from this imposing volume. Far from being an end-of-career muse or swansong, it is a major achievement. Even more astonishingly, a second volume – which will flesh out the biology in more detail – is promised.

Purchase From strange simplicity to complex familiarity from Amazon.co.uk