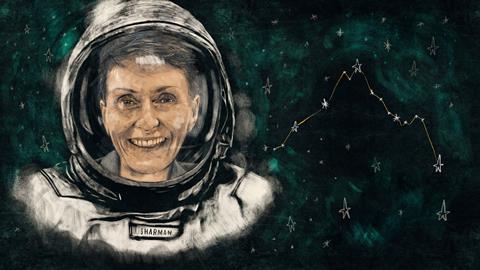 In situ with Helen Sharman

The astronaut and chemist on mountains, science careers and the view from space

Helen Sharman is a British chemist based at Imperial College, London, UK. In 1991 she became the first Briton in space when she visited the Russian Mir station.

I love mountain walking. That’s where I get my peace and tranquillity. Even when I was doing my astronaut training, I took time out to go to the Alps. I like the magnificence of the mountains – they help put life in perspective. It makes you realise your problems aren’t really that vast.

The first time I saw the Himalayas was from space. The way the light just reflects off the snow and ice is such a magnificent sight, and you can see the glistening rivers and pools of water. I realised I had to go there.

I’ve always enjoyed music; mostly classical, but also jazz, easy listening and types of music I wouldn’t recognise because I’m not young enough to know the names! Working and living at Imperial College, I’m just down the road from the Albert Hall, and the proms are always fabulous. I’ve always played the piano – I never made it big because my fingers aren’t long enough.

I’m at home in London. I grew up in Sheffield, which prides itself on being a very big village, but I’ve grown to love London for all the other things – there’s always something on, at all times of the day. I love listening to organ music, and on every day of the week it will be playing somewhere in London, with all its little churches you can always find it. I love London’s vibrancy and its international nature: the constant refresh of culture is now what I think of as being British.

My career has been completely different from anything I ever imagined. My first job was working for the General Electric Company with physicists and electronic engineers. I was the only chemist, the go-to person at age 21. Back in the 1980s you had one career, maybe one or two jobs, and hoped you would eventually be promoted to a technical director. I never thought I would go into space, or stand in front of people talking science, or managing in a science environment.

The exciting thing for young people is that half of the jobs they will have don’t exist yet. A chemist graduating now can look forward to an unknown but very exciting life. It’s looking good, especially for people who can think outside the box and enjoy doing what they’ve been told not to do.

I like the increasingly interdisciplinary nature of science. We couldn’t exist if we didn’t have physicists in the chemistry department, or if we weren’t doing joint projects with medicine or materials. I like that, to make good headway, you need to involve different aspects of science.

I wasn’t a scientist in space, I was a technician. I didn’t devise the experiment or design them, I didn’t analyse the results and I didn’t make any conclusions, I just did what I was told! I took a miniature lemon tree into orbit. Part of that was looking at how they stay alive, but also the psychological aspect of having green plants around you.

We still can’t grow food in space. There was a lot of work on growing fruit and vegetables. We can grow from a seed, but we haven’t got the whole lifecycle of growing a plant, fertilising the flowers and producing fruit. At the moment, the thinking is that it’s something to do with the climate. You don’t get convection in space, so you don’t get the currents flowing over the leaf across the pores on a micro scale.

I remember the last view I had from the space station. The windows are circular, and there’s no curtain – it’s like an aperture on a camera. As it’s light or dark quite often [as you orbit], when you’re trying to sleep it can be quite distracting, so the window was usually closed. On my last night the other astronauts agreed I could keep the window open so I could watch the Earth spinning below. The absolutely fabulous blue seas, the white clouds reflecting the sunlight… I was determined to stay awake, but of course I didn’t.

The colours you see on images of the Earth aren’t as vivid as real life. That blue – that fabulous, gorgeous deep blue – feels like it goes down and down. The white of the clouds and snow, the brick-red deserts … there are some amazing colours to see. You don’t notice individual people or objects, but you can see the effects of people: things in a long, straight line, like the wakes of ships, or the condensation trails of planes or smoke from fires.

I enjoy the crossword at the back of the Journal of the Royal Geographical Society of London. It gives me a taste of life outside of what I know. I love chemistry, but I admit that I don’t read my chemistry journals when I go to bed at night!

Helen Sharman is a British chemist based at Imperial College, London, UK. In 1991 she became the first Briton in space when she visited the Russian Mir station. She was speaking to Kit Chapman.