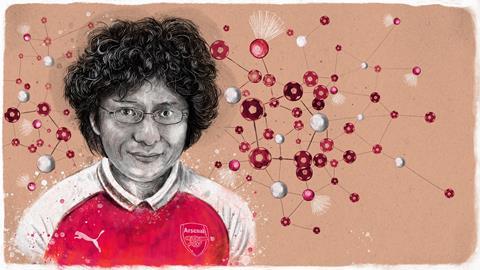 In situ with Jin-Quan Yu

The organic chemistry maestro on football, food and cleaving the C–H bond

Jin-Quan Yu is a synthetic chemist at the Scripps Research Institute at La Jolla in the US, researching new reactions using C–H activation. In 2016 Yu was awarded a MacArthur fellowship, better known as a genius grant. He was speaking at the 2018 EuCheMS Chemistry Congress in Liverpool, UK.

Sports are my main hobby. I didn’t have access to sport before I went to college so I started sports very late. At university I learnt soccer and have played it on and off for many years. When I was in Cambridge, it was harder for me to get a game because the standard was high so I started playing badminton. A couple of months ago I became really interested in table tennis, which is funny. Everyone in China knows how to play table tennis but not me because I grew up in a really remote area and we didn’t have access to any sports.

I’m a fan of Arsenal. I know they are losers but I like their style.

Like science, sport is about the excitement of learning something new. The best soccer players have really good insights – they know where to run and how to score. That’s the same joy I take when I do chemistry, it’s instinct. In sport, you have to do it to get better and that’s also the same with chemistry. Likewise, a coach can only inspire you, in the end you have to have your own intuition and learn how to discover.

We have a local Chinese restaurant that cooks noodles, but it wasn’t right. I changed their recipe so now they call it Professor Yu Noodles

I sing a lot. If I find a song interesting, I learn how to mimic the singer’s voice. It can be anything – opera, pop songs or songs based on Chinese culture. I sing in the kitchen at home when I’m cooking – my kids actually endorse my singing skills.

If I get home late, I read. I don’t read sophisticated books, I actually read children’s books. It’s very strange, but maybe it’s because I didn’t have access to them as a kid. They’re easy to read and I like the pictures – I collect them, they’re all over my bedroom. 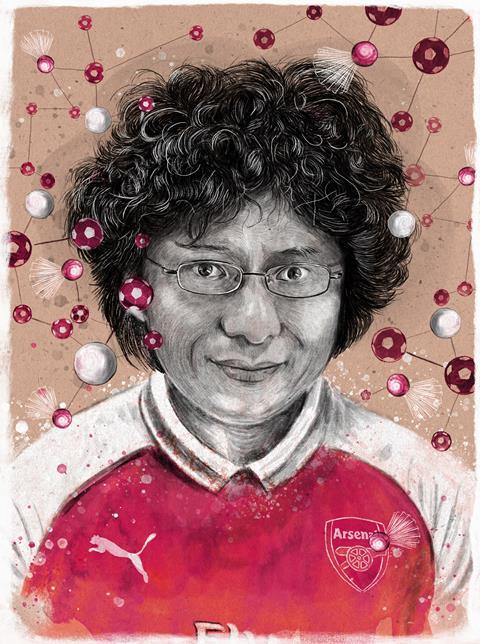 I like Szechwan-style food, but I also like Japanese food or a California steak. Always medium rare. One of my favourite Chinese foods is noodles. We have a local Chinese restaurant that cooks noodles, but it wasn’t right. I changed their recipe so now they call it Professor Yu Noodles. It’s very popular. It has bamboo shoots, egg rolls, fried tofu, green beans and shredded pork. It’s my mum’s recipe.

Every time I travel, I am impressed. Although I prefer to stay in the lab, I do love to travel and I love to see new things.

I was always hooked on how to make molecules. I went to Cambridge to study molecular biology and biosciences. My idea was to study nature and make better enzymes to make molecules. But in reality enzymes are also limited in their own way; there are many things they cannot do. So I realised my perspective wasn’t quite right. Then I bumped into EJ Corey from Harvard when he was visiting Cambridge. We had lunch and that led to a postdoc in his lab. I went to his lab to see how they, the best, make molecules. There I realised that they always had to go round and round because the C–H bond was blocking them. You couldn’t walk straight; you had a mountain to climb.

If you break the C–H bond, you can go through a tunnel. I wrote a proposal and I heard the Royal Society gave me the number one score that year. It was five years of money that started my career in Cambridge to break the C–H bond. Cambridge took a calculated risk on me but they didn’t give me a lot of resources – I had one student and one fume hood. And then it was too slow, and that’s why I went to America.

There have been many great contributions on asymmetric catalysis including Nobel prize winning works. You always create three-dimensional stereochemistry from flat atomic centres like a double bond or a ketone, which are flat. There are already stereomodels on how to create chiral centres from flat molecules. But if you perform a C–H bond cleavage then the big question is how do you break the symmetry because it’s a tetrahedral carbon centre. We systematically studied how you can control the stereochemistry of the tetrahedral centre when performing C–H activation. If I cannot find a good solution to that problem in my career, I will be very disappointed.

We don’t plant enough seeds of interest in the younger generations. That could be very dangerous. There are lots of non-scientific attractions in the modern world – like the internet. Technology can be a distraction for young kids who need to have time to grow their curiosity and be interested in fundamental science – to think independently.

I try to make my science relevant to drug discovery etc. But on the other hand, if too much emphasis is placed on being immediately useful, that is dangerous too.

Jin-Quan Yu is a synthetic chemist at the Scripps Research Institute at La Jolla in the US, researching new reactions using C–H activation. In 2016 Yu was awarded a MacArthur fellowship, better known as a genius grant. He was speaking to Jennifer Newton at the 2018 EuCheMS Chemistry Congress in Liverpool, UK.