A veneer of Vermeer

Wei-lun Toh tells a story of forgery and chemical detectives

In the aftermath of the second world war, allied soldiers recovered paintings of great value that the Nazis had looted from museums during their conquest of Europe. Among these was a most remarkable work by the eminent Johann Vermeer, The woman taken in adultery, found in the stash of Hermann Goering, Hitler’s second-in-line. Tracing its acquisition records pointed to a certain Han van Meegeren as the dealer in Amsterdam and a potential traitor to the Netherlands. Faced with a charge of collaboration for selling a Dutch national treasure to the Nazis, van Meegeren wrestled with a dilemma: stand trial for this act of treason, punishable by death, or confess to forgery? 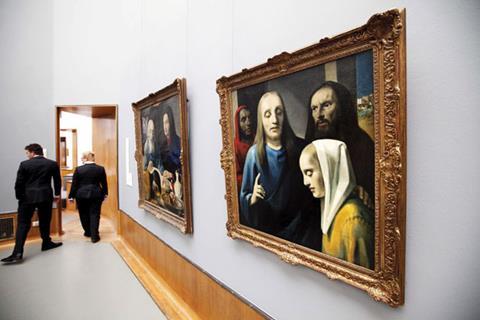 Van Meegeren had forged The woman taken in adultery, as well as a handful of other artworks, attributing them to Dutch golden age painters Vermeer and Pieter de Hooch. This arose out of a desperate need for income due to his failing artistic career as well as a personal vendetta against the art historians and museum curators who denied his talents.

Van Meegeren was a unique forger, in that he created ‘original forgeries’ – paintings made to resemble the style of a particular artist but which had never been created by them. He imitated the styles of the masters so convincingly that he was able to dupe both the Nazis and well-regarded art historians. He accomplished this with a number of duplicitous tricks, including purchasing genuinely aged canvases and using the expensive ultramarine blue pigment that artists would have exclusively used for blue in the 17th century.

One trick involved mixing bakelite into paint pigments and baking completed canvases in the oven – the resulting hard paint layer gave the appearance of authentic age. Bakelite is the common name for a resin, a thermosetting plastic synthesised from an elimination reaction between phenol and formaldehyde.

Unfortunately, his clever sleight of hand was eventually seen through. A key witness to the trial was Paul Coremans, a Belgian chemist. To disprove van Meegeren’s work, he conducted x-ray radiography on the forgeries. The radiograph revealed damage marks from van Meegeren’s modification of the canvases he had obtained to fit his new paintings, detecting traces of the old paint layer’s white lead residue he had scraped away and showing that the craquelure of the underlying primer layer did not match that of the painted surface layer, which van Meegeren had artificially induced. Another anachronism was that the ultramarine blue pigment van Meegeren had used contained traces of cobalt blue, a cheaper synthetic alternative that would have been unavailable during Vermeer’s time.

Of course, a number of sceptics to van Meegeren’s admission of fraud remained. These were previous buyers of the forgeries in question or art historians whose reputations were on the line, all of whom had a vested interest in the paintings. All doubts were laid to rest in 1967, when a team of experts at Carnegie Mellon University in Pittsburgh, US, conducted a follow-up investigation using lead-210 dating. White lead pigment contains 210Pb, an isotope of lead that is part of the 238U radioactive decay series – where it exists in radioactive equilibrium with 226Ra. Processing lead ore into the pigment strips the 226Ra, leading to disequilibrium and the radioactive decay of 210Pb. Hence, by considering the half-life of 210Pb (around 22 years), the age of a painting can be placed. The analysis conclusively proved that the painting could not have been produced in the 17th century.

And what of van Meegeren? He gained fame among the Dutch people as a national hero who had been able to deceive the eyes of the Nazis and Dutch art historians, widely perceived to be elitist and arrogant. It was said that when Goering was told the Vermeer he had owned was a fake, he ‘looked as if for the first time he had discovered there was evil in the world’. Van Meegeren was eventually charged for fraud, but died before he could serve his sentence. Nevertheless, this episode has been instrumental as a platform for showcasing the power of analytical techniques widely employed in chemistry, which were qualitatively and quantitatively superior to the discerning eyes of experts, further integrating what is already a quintessential science into our everyday lives.

Wei-lun Toh won a runner-up prize in the 2014–15 Chemistry World science communication competition with this article. Find out more about this year’s competition