This year’s Nobel prize in chemistry was a tour de force for crystallography, underscoring the vital role chemistry plays across the sciences, reports Bea Perks

This year’s Nobel prize in chemistry was a tour de force for crystallography, underscoring the vital role chemistry plays across the sciences, reports Bea Perks

’Of course it’s chemistry!’ says Aaron Klug of the Laboratory of Medical Biology, Cambridge, UK. Klug won the Nobel prize in chemistry in 1982, and that’s his response to critics who fear the prize is being taken over by biologists. 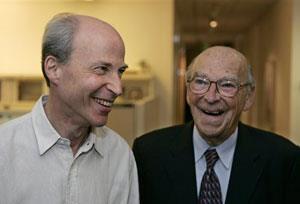 The noble Kornbergs, father and son

This year’s chemistry Nobel went to Roger Kornberg, professor of structural biology at Stanford University, US, for his work on the molecular basis of eukaryotic DNA transcription.

Eukaryotic organisms – from yeast to humans – keep their genetic material inside cell nuclei. Transcription is the mechanism by which a DNA template is converted (transcribed) into an RNA message. Messenger RNA (mRNA) molecules form the templates for protein production. It turns out that all eukaryotic organisms transcribe DNA in the same way.

Klug won the chemistry Nobel 24 years ago for his development of crystallographic electron microscopy and for resolving the structure of nucleic acid-protein complexes. Just over 20 years before that, in 1959, Roger Kornberg’s father, Arthur, won the Nobel prize in physiology or medicine for his part in discovering the mechanisms in the biological synthesis of RNA and DNA. And this year’s medicine or physiology prize also rewarded studies into the molecular basis of genetics (in Box).

Flash bang wallop, what a picture

The committee that awards the chemistry Nobel, the Royal Swedish Academy of Sciences, trained the spotlight on a structure published by Roger Kornberg in 2001. 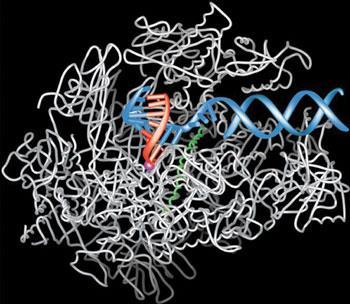 Kornberg electrified the research community that year when he produced what was essentially a snapshot of transcription as it occurs in the nucleus of a cell – imaging an RNA strand under construction. The picture showed a growing RNA strand (red, in the image on the left), the DNA that the strand was being copied from (blue), and the enzyme, RNA polymerase II, which was doing the copying (a great tangle of white).

The polymerase molecule is shown keeping the DNA strand in the right position during transcription, and creating a cavity just big enough to accept the RNA building block that fits the opposing DNA building block exactly. The wrong building block wouldn’t fit. DNA is composed of four types of building block, or base: adenine, thymine, guanine and cytosine. The two strands of the double helix are held together because, as Watson and Crick showed, adenine on one strand always pairs up with thymine on the other, and guanine pairs up with cytosine. A DNA template dictates the RNA sequence in the same way, except that thymine in DNA is replaced by uracil in RNA. So an adenine building block on a DNA strand dictates a uracil building block on the opposing RNA strand. And guanine dictates cytosine as before. Once a new building block has been inserted in the right place, the DNA strand is prompted forward by a small helical structure (green, in the image on the left) in the polymerase.

According to the awarding committee, ‘The truly revolutionary aspect of the picture Kornberg has created is that it captures the process of transcription in full flow.’

Kornberg had stopped transcription mid-flow by missing out an essential molecular building block needed at a particular point in the RNA construction process. Once transcription reached that point, it came to a halt. Kornberg created crystals of those arrested molecules and determined the crystal structure of transcription in action at 3.3Å resolution. At the same time, he published two crystal structures of the RNA polymerase II enzyme alone – one (showing the enzyme opened up) at 3.1Å and one (showing it closed) at 2.8Å. A 50-kilodalton region of the polymerase called the clamp – which opens and closes – is thought to close over the DNA as it enters the enzyme.

‘Getting the crystals was a tour de force,’ said Klug. Obtaining reproducible 3D crystals of the enzyme complexes was no easy matter. The RNA polymerase II complex is present in such low amounts in yeast that even to get a 5Å crystal structure, which had been achieved in 1999, the team had to purify 10,000 litres of cultured yeast cells.

Kornberg used yeast cells as model eukaryotes because they could be genetically modified and cultured relatively easily. His team spent 10 years fine-tuning the system before it could be used to investigate the transcription process. Years went by during that time when no progress was made; delays that would have persuaded many other research groups to give up on the idea.

Crystal structures generally show a finished complex or individual molecule. But capturing a chemical reaction as it takes place, as Kornberg did, is a different matter. It was not good enough to be a good crystallographer. What was so special about Kornberg was that he combined astonishing crystallography with very deep biochemical knowledge. The winning combination made it possible for him to assume full control of the process he wanted to show.

Which is certainly not to down-play his role as an exceptional crystallographer. Alongside the transcription-in-action shot at 3.3Å, Kornberg has studied crystals of RNA polymerase, DNA, RNA and general transcription factors. These images all made it possible to understand the molecular mechanisms governing transcription.

The electron density map of the actively transcribing complex of RNA polymerase II with DNA showed, very clearly, synthesised RNA, a nine base-pair DNA-RNA hybrid, and three bases of the single-stranded DNA template known from biochemical studies to be unwound before it enters the hybrid duplex. The active site where the ester bond is broken in substrate nucleoside triphosphates was marked by a metal ion at the base of the hybrid.

‘Some people say [Kornberg’s work] is not chemistry,’ says Klug. ‘But of course it is. It’s the chemistry of large molecules.’ Kornberg worked with Klug at the Laboratory of Molecular Biology – where the structure of DNA had been resolved 20 years earlier – from 1972–75. They worked together on chromosomes. In Klug’s Nobel lecture, he remembered how Kornberg proposed, in 1974, a definite model for the basic unit of chromatin (the complex of DNA and proteins that makes up chromosomes) as a bead of about 100 ? diameter, containing a stretch of 200 DNA base pairs condensed around a protein core made out of eight molecules called histones. Kornberg comes from an illustrious stable, not only because his father was a Nobel laureate, but also because he was prompted to work with Klug on chromatin by Francis Crick, who worked at the LMB when Kornberg arrived. Klug told Chemistry World  he thought Kornberg should have been named in his own Nobel prize in 1982: ‘I have no say in this, but I think he could have been included.’ But perhaps it was too early, he says; Kornberg’s findings, now accepted, were still questioned at the time. At the end of his Nobel lecture, Klug thanked Kornberg ‘whose skill and insight transformed a “messy” project into a clear problem.’

Chemists routinely complain that the chemistry Nobel is not going to chemists, sighs Klug. But the prize reflects the breadth of the topic. Similarly, look at the breadth of what comes under the heading ‘medicine or physiology’, but wouldn’t be called either today. The problem is Nobel’s will, written in 1895, says Klug. Scientific research has evolved since then, but the will remains set. ‘Some things could be chemistry or medicine,’ he says. ’Who knows? The distinctions are very hard to tell.’

The Royal Society of Chemistry uses a broad definition of chemistry – from nanotechnology to epigenetics and beyond. ’Which is very sensible,’ says Klug , ’because chemistry is much wider than synthetic chemistry, which some people believe is the heart of it. It’s the greatest skill there is, synthesising these compounds, but that’s just one part of chemistry.’ Last year’s chemistry Nobel went to three chemists for the development of the metathesis method in organic synthesis.

The ACS and the RSC welcomed this year’s award unreservedly.

’Quite frequently the Nobel prize for chemistry is tied in with medicine or physics. It just goes to show how important chemistry is to other sciences,’ said Jim Feast, president of the RSC. ’This is further proof that chemistry is fundamental to our understanding of the nitty-gritty of biology.’

Ann Nalley, president of the ACS agrees: ’Chemistry has had a key role from the very onset of the genetics revolution. It has provided the core technologies that enabled molecular biology and biotechnology to leap ahead.’

A good year for RNA

It was a good year for RNA. Not only did Roger Kornberg win the Nobel prize in chemistry for his work on transcription and RNA polymerase, but this year’s Nobel prize in medicine or physiology was awarded to Craig Mello, professor of molecular medicine at the University of Massachusetts medical school, US, and Andrew Fire, professor of genetics at Stanford University school of medicine, for their work on gene silencing by the mechanism of RNA interference (RNAi).

RNAi is activated when RNA molecules occur as double-stranded pairs in the cell. Double-stranded RNA activates biochemical machinery that degrades messenger RNA molecules with a genetic code identical to that of the double-stranded RNA. It is a natural regulator of gene expression, and guards against viral infection. It is used in the lab to study gene function, and many researchers - including Fire and Mello - believe it holds therapeutic promise.

The award is further evidence for the difficulty with umbrella headings for scientific specialisms post-1895. Mello and Fire aren’t medics, and they aren’t physiologists. In fact, Fire isn’t sure where he fits in label-wise. He has an appointment in two departments at Stanford - genetics and pathology. ’I’m not a pathologist . but I guess I do have some background as a geneticist,’ Fire told Chemistry World.

’I think that there’s some chemistry in all of it, basically,’ said Fire, looking at both the chemistry and medicine or physiology Nobel prizes. Chemists could be annoyed or they could be proud. Roger [Kornberg, also at Stanford] has a wonderful grounding in chemistry, and his achievements required a huge amount of it. We’re [Mello and Fire] sort of armchair, vicarious chemists.’