A few male chemists were fervent supporters of the women who sought to joining their ranks at the turn of the 20th century, as Marelene and Geoff Rayner-Canham find out

A few male chemists were fervent supporters of the women who sought to joining their ranks at the turn of the 20th century, as Marelene and Geoff Rayner-Canham find out

British chemistry has not always been hospitable to women. It took a 40-year battle before women chemists gained admission to the Chemical Society, one of the RSC’s founding societies, in 1920. The Manchester University student chemistry society managed to bar women chemists from membership until 1909. At Oxford University, Dorothy Hodgkin was thrown bodily out of a meeting of the male-only senior Alembic (chemistry) club, which did not admit women chemists until 1950. And in Edinburgh in 1870 it had been a chemistry professor and his (all male) students who instigated the Surgeons’ Hall Riot to try to prevent five women (including one chemistry student) from writing their examinations for medical school. 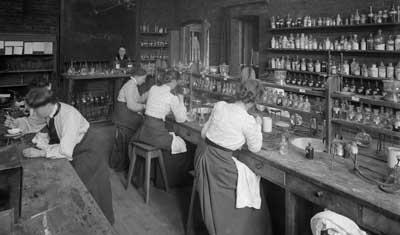 Female undergraduates at Girton College, Cambridge University, were among the lucky ones

But not all male chemists fought against women joining their ranks. Many played a strong supportive role, sticking their necks out to fight prejudice and further women’s role in chemistry.

The earliest fervent pro-feminist chemist was Vernon Augustus Harcourt, Lee’s reader in chemistry at Oxford, and father to eight daughters and two sons. In 1879, Harcourt was one of the founders of the non-denominational Oxford women’s college, Somerville. At the time, women students were segregated and had to find professors who would repeat the lectures that had already been given to the male students. By refusing to give separate lectures, Harcourt forced the authorities to permit mixed classes. He also objected to having chaperones for women students in the laboratory. One woman, Mary Florence Rich, attended his 1885 quantitative analysis course, and Harcourt avoided the need for a chaperone by having W H Pendlebury’s research student, Margaret Seward, perform her experiments in the laboratory at the same time. 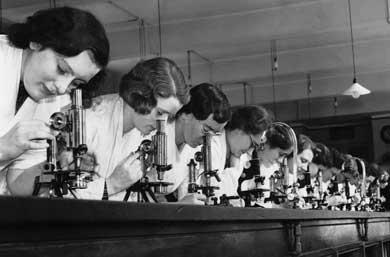 In the early 1900s women could enter some science fields; these women were students at a London hospital

Harcourt was the first to raise the issue of admission of women to the Chemical Society. In 1880, he proposed a motion that any reference to men in the bye-laws should also include women. Perhaps unsurprisingly the motion was rejected. But two young chemists, William Ramsay and his long-time friend William Tilden nobly carried on the fight.

In 1888, Ramsay put forward a similar motion to that of Harcourt’s. Ramsay reluctantly withdrew the motion after a lengthy discussion when it became evident that it would not be passed. But he had not given up the fight.

In 1892, a female chemist, probably Emily Lloyd - the first woman associate member of the Royal Institute of Chemistry (another founding society of the RSC) - was put forward for Fellowship of the Chemical Society. Spurred by this event Ramsay moved a motion, seconded by William Tilden, that qualified women, in general, be admitted. An amendment was proposed that it was not desirable to admit women at that time. This amendment was defeated by seven votes to six, then, bizarrely, the motion itself was defeated, eight votes to seven.

Following a petition in 1904 by 19 women chemists, a new motion for admission failed once more. Tilden was infuriated with the outcome and expressed his displeasure in his 1905 address as president of the Chemical Society:

’The number of women desiring admission is but small, and I fail to see any cogent reason, beside the legal one, for excluding them. Some of them are doing admirable scientific work, and all the memorialists are highly qualified. To deprive them of such advantages as attach to the Fellowship simply on the grounds that they are not men seems to be an unreasoning form of conservatism inconsistent with the principles of a Society which exists for the promotion of science.’

In 1908, Tilden put forward yet another motion, with Edward Thorpe as seconder, but this too failed. Ramsay was exasperated by the never-ending obstructionist tactics of the few, declaring: ’’’Lord what fools these mortals be’’ is the truest thing that was ever said.’ It was not until Parliament passed the Sex Disqualification (Removal) Act in 1919 that in 1920 the Chemical Society finally admitted women.

Ramsey and Tilden both did what they could to push forward women chemists in their own research groups. Ramsay had supervised his first woman student, Katherine Williams, when he had been at Bristol College (later the University of Bristol) in the 1880s. After Ramsay moved to University College London, Emily Aston - who was to become the most prolifically published woman chemist of the late 19th century - was among the women in his group.

Tilden invited Martha Whiteley, one of the most renowned women chemists of the early 20th century, to join him as an assistant at the Royal College of Science (later part of Imperial College). Whiteley went on to become the first woman lecturer in chemistry at a co-educational university. She had helped prepare the second edition of (Edward) Thorpe’s dictionary of applied chemistry  . Interestingly, Thorpe, as well as joining the fight to get women admitted to the Chemical Society, was possibly the first to take on women chemistry students - back in 1881 when he was at the Yorkshire College of Science (now the University of Leeds), he published research contributions with three female students.

Meanwhile, Jocelyn Thorpe followed in his (unrelated) namesake’s pro-feminist footsteps. Thus Jocelyn Thorpe and Whiteley co-authored the third edition of Thorpe’s dictionary of applied chemistry  . Jocelyn Thorpe was way ahead of his time, reserving (at Whiteley’s suggestion) two or three places in his research group specifically for women. One of those to gain a reserved spot in 1921 was the biochemist Helen Porter.

Women chemists played an especially important role during the first world war, thanks in part to two male professors. The first of these was William Palmer Wynne, head of chemistry at the University of Sheffield. During the first world war he recruited a team of female chemistry graduates to produce large quantities of local an?sthetics, which were desperately needed for the war effort. The second was Kennedy Orton: all of the early successful women chemists from University College of North Wales, Bangor (later the University of Bangor) were Orton’s proteg?es. Phyllis Violet McKie, the most prominent woman chemical researcher in the first world war, worked with Orton. 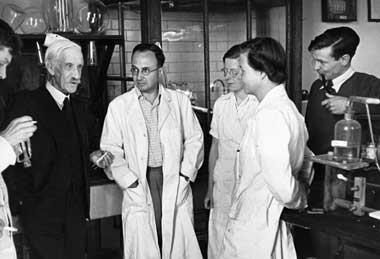 Frederick Hopkins, famous for his work on vitamins, gave women an equal role in his labs

In Britain, many women chemists veered towards biochemistry for their careers, joining organisations such as the Lister Institute, London, and the Rowett Institute in Aberdeen. But it was the Cambridge group under Frederick Gowland Hopkins (1861-1947) that provided a unique community of talented women biochemists. As Mary Creese commented in her 1991 paper in the British Journal for the History of Science  :

’At the time when there were practically no women research workers in any of the other university departments at Cambridge, Hopkins gave them places in his, despite the criticism which this brought him. Even in the 1920s and 1930s, when, as a Nobel laureate with a world-wide reputation he received hundreds of applications for places in his laboratory, nearly half of the posts in his Department went to women scientists.’

Among his students were Edith Willcock, who contributed to the discovery of vitamins; the plant biochemist Muriel Wheldale Onslow; the leather chemist Dorothy Jordan Lloyd; and the microbial biochemist Marjory Stephenson.

Several British male chemists promoted the ’feminine cause’, but what was the situation elsewhere? There were certainly male chemists in other countries who supported women students. The University of Zurich was exceptional in its welcoming of women students from the mid-1860s. In the latter-part of the 19th century, Zurich was one of the few universities granting PhD degrees to women. Among those who travelled to Zurich for this purpose was American chemist Rachel Holloway Lloyd, who worked with Victor Merz between 1885 and 1887 on the high-temperature conversion of phenols to aromatic amines; and British chemist Edith Humphrey, who synthesised the first chiral octahedral cobalt complex while working with Alfred Werner from 1897 to 1901. Humphrey and Lloyd were the first women of their respective countries to obtain doctorates in chemistry.

In the US, Lafayette Mendel at Yale University provided a mentoring role for American women biochemists. From his appointment in 1896 until his death in 1935, Mendel trained about 124 PhDs in biochemistry, of whom 48 were women. The women of Mendel’s group were particularly tightly knit.

However, the battles for admission to professional societies in Britain seem to have been much more protracted than elsewhere and the need for ’white knights’ much more crucial. It took a 40 years for women to be accepted into the Chemical Society.

The earlier crusade to admit women to the Royal Pharmaceutical Society (led by the indefatigable Robert Hampson) had taken from 1869 to 1879 before success. Yet in many other countries, women were admitted to their national chemical societies earlier and with less contest. For example, in the US, a woman chemist, Rachel Littler Bodley, had been among those who planned the formation of the American Chemical Society (although she resigned in protest following the ACS Misogynists’ Dinner at the Boston meeting of 27 August 1880).

At the inaugural ACS meeting in 1876, three women chemists were present, including the renowned Ellen Richards from the Massachusetts Institute of Technology. Meanwhile the German Chemical Society elected its first woman associate member, Elsa Neumann, in 1901.

Crystallographer William Henry Bragg (1862-1942) is often thought to have been the first in his field to take on women students - indeed 11 of his 18 students at the Royal Institution were women; one of these was Kathleen Lonsdale, after whom the mineral lonsdaleite was named. 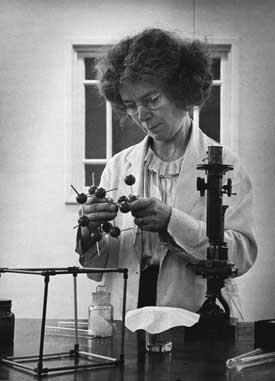 Kathleen Lonsdale was one of William Bragg’s students

In fact the story of women in this field goes back much further, to the mineralogist Henry Alexander Miers who was elected to the chair of mineralogy at Oxford in 1895. Two women contributed to the work of Miers’ crystallography group, one of whom, Mary (Polly) Winearls Porter, acted as a mentor for Dorothy Hodgkin.

But it is J D Bernal (1901-1971) who probably deserves the greatest recognition. Not only was the crystallographer’s first research student a woman, but throughout his career he mentored several pioneering women crystallographers, including the ice crystal structure specialist Helen Magaw, and the first to solve a peptide structure, Winifred Booth Wright. Hodgkin was a member of Bernal’s group at Cambridge from 1932 to 1934 and, in the obituary that she wrote for him, described the very pleasant working atmosphere and rather convivial lunches:

’Every day, one of the group would go and buy fresh bread from Fitzbillies [which still exists], fruit and cheese from the market, while another made coffee on the gas ring in the corner of the bench. One day there was talk about anaerobic bacteria on the bottom of a lake in Russia and the origin of life, another, about Romanesque architecture in French villages, or Leonardo da Vinci’s engines of war or about poetry or printing. We never knew to what enchanted land we would be taken next.’

And it was Bernal, then at Birkbeck College, London, who in 1953 provided a haven for Rosalind Franklin after she could no longer take the atmosphere at King’s College, London.

It is unfortunate that most biographies of chemists seem to extol their contributions to chemical science without detailing the wider good that they may have accomplished. The men that fought for women chemists’ rights, a cause that was not popular during their eras, should be applauded. Today’s women chemists, and society in general, have a lot to thank them for.