What do you get when you cross a scientist with a designer?

What do you get when you cross a scientist with a designer?

What do you get when you cross a scientist with a designer? A recent project Nobel textiles: marrying scientific discovery to design  , set out to answer exactly that question. Supported by the UK’s Medical Research Council (MRC) and Central Saint Martins College of Art and Design, London, the project paired five Nobel prize-winning scientists with five textile and fashion designers, with the aim of translating some of the scientific principles behind the work of the scientists into textiles and other design materials. It culminated in a series of events earlier this year at the Institute of Contemporary Arts in London, including an outdoor exhibition. The results provide a whole new interpretation of Nobel prize-winning science. 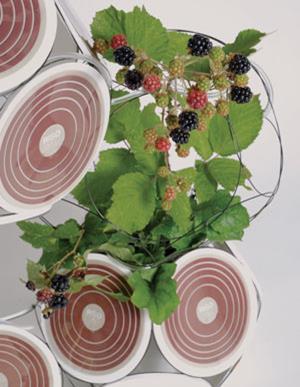 A combination of living plants and dye-sensitised solar cells by Winfield illustrating energy conversion involving adenosine triphosphate (ATP) in living cells, for which Walker received a Nobel prize in chemistry in 1997. The relationship between structure and energy also inspired Winfield to design lightweight architectural wire structures to support plants for urban agriculture. 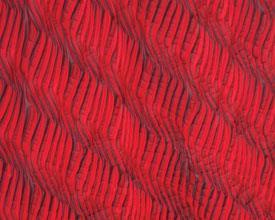 Fabrics by Brock inspired by Klug’s Nobel prize-winning work (1982) on the crystal structures of protein-nucleic acid complexes. The fabrics incorporate the concept of 3D models being built from 2D information - they appear 3D depending on the viewing angle and whether they are wet or dry. The self-assembly organisation of the tobacco mosaic virus, with its helical arrangement of protein subunits around an RNA core, was a particular inspiration to Brock. 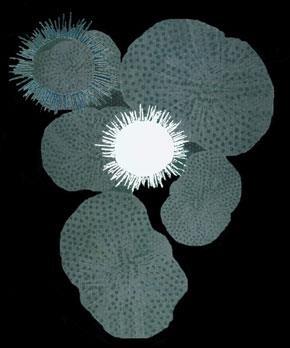 Kelly’s wallpaper explores the concept of appearance and disappearance as exemplified by cyclins - proteins which appear and disappear at the moment of mitosis, when chromosomes separate. Hunt studied these proteins in sea urchin eggs and received a Nobel prize in 2001.

A home dressmaking study by Fox of body size and fat as a social issue, based on Mansfield’s work on MRI body scanning for which he received a Nobel prize in 2003. 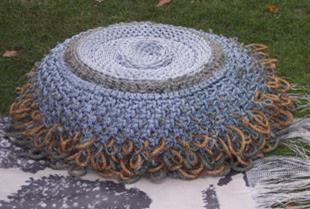 The ’suicidal pouffe’ - a garden seat by Collet that gradually biodegrades was inspired by Sulston’s work on programmed cell death (apoptosis) in multicellular organisms using  Caenorhabditis elegans . Sulston received a Nobel prize in 2002.