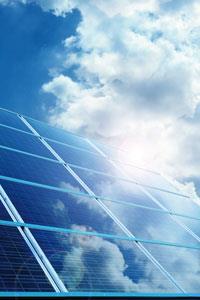 Germany is widely touted as the global leader in research and development for solar power, an industry that had revenues of

5.6 billion (?4.8 billion) in 2009 and includes more than 70 of the world’s leading photovoltaic players. Perhaps surprisingly considering its location in northern Europe, the technology is also widely used in the country, with 160 000 solar cells installed in Germany during 2009 - 53 per cent of total global installations.

Germany’s strength in this field can be attributed to a decade of lavish financial incentives for homeowners and businesses who install solar panels and, until the past couple of years, little competition from manufacturers in other countries. But those days are coming to an end. Subsidies are being slashed and Asia-based solar cell exporters are slipping through Germany’s door - pushing the cost of solar cells for consumers, and therefore profits for producers, down.

Most of Germany’s solar technology R&D is carried out in a region called ’Solar Valley’. The area - that encompasses the former communist East German states of Saxony, Thuringia and Saxony-Anhalt - has been coined Solar Valley by energy companies, politicians and scientists wanting to portray themselves as the photovoltaic equivalent of the computer industry’s Silicon Valley in San Francisco, US.

Some might laugh at the name due to the flatness of the region - no valleys in sight. But there is no denying that Solar Valley’s photovoltaic industry has, in little more than a decade, grown from almost nothing to become a top player in this field - housing dozens of young companies in all aspects of solar cell production.

’There is no company here much older than 10 years,’ says J?rg Bagdahn, codirector of the two-year-old Fraunhofer Center for Silicon Photovoltaics (CSP), based in Halle, Saxony-Anhalt. 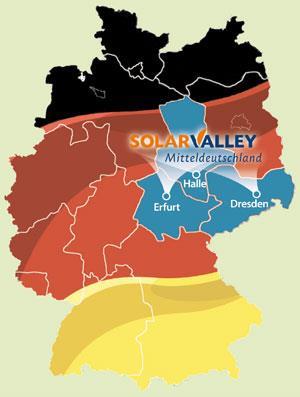 ’I’m not sure there is another [photovoltaic] cluster any place else in the world with such a high density as Solar Valley,’ says Thomas Grigoleit, director of renewable energies at Germany Trade and Invest, a federal agency promoting foreign investment in Germany. ’This is not a small start-up industry anymore,’ he adds.

Solar Valley largely owes its existence to the region’s flourishing chemical and semiconductor industries, both key ingredients for a photovoltaic industry. After Germany’s reunification in 1990, eastern Germany became home to a thriving chemical industry with big firms utilising cheaply acquired sites previously operated by communist East Germany. And in the 1990s, the area around Dresden in Saxony became a world-class centre for microelectronics, with major production sites for global electronic firms AMD and Infineon Technologies. Both the semiconductor and chemical industries in the region also benefited from EU redevelopment subsidies after reunification, helping them grow rapidly.

In the late 1990s, when local politicians sought to develop new industry to create jobs, photovoltaics seemed a perfect match for the region. ’There was a very effective system already in place that you could use and benefit from,’ says Grigoleit. ’A photovoltaic cell is not really very much different from a semiconductor, only bigger.’

Living in each other’s pockets

Today as well as enticing many smaller firms, the potential of big profits has attracted older, traditional German companies. One example is the Bosch group, a global conglomerate with 2009 sales of

38.2 billion. In 2008, Bosch bought a majority stake in Ersol Solar Energy, changing the name last year to Bosch Solar Energy, which now employees 1500 people at production plants in Erfurt and Arnstadt in Thuringia.

Holger von Hebel, chief executive of Bosch Solar Energy, says of Solar Valley: ’the location stands out due to the close connections between science and development with technology-oriented businesses.’ He adds that it also makes sense to be based in Germany, with 82 per cent of the firm’s 2009 sales (of 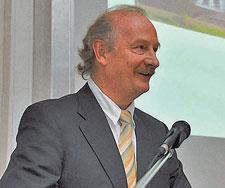 ’We believe that Solar Valley will be competitive in the future,’ he says. ’Proof is our massive expansion plan at our production location in Arnstadt.’ The expansion, due to be completed in 2012 at a cost of

530 million, will also include a new headquarters and an R&D centre.

Bagdhan agrees with von Hebel that one of the big advantages of Solar Valley is the close cooperation between industry and research, which often includes face-to-face meetings.

Hans-Joachim M?ller, director of the Institute of Experimental Physics at the University of Mining and Technology in Freiberg, near Dresden, is also in agreement, adding that more than 60 major research groups operate in Solar Valley, most in close collaboration with industry.

’There is a feeling that we are working toward a common goal,’ says M?ller. ’We are at the cutting edge of photovoltaic research.’ And like others in the Solar Valley, he recites the mantra: ’the main goal is to reduce costs.’

Perhaps the biggest factor in Solar Valley’s success, however, has been Germany’s feed-in-tariff scheme, designed to stimulate sales of solar panels and help the industry develop critical mass while scientists work to improve solar cell efficiency and cut production costs.

Under the current scheme, homeowners, businesses and farmers who buy and install solar photovoltaic panels on their property are able to sell electricity to the utility companies at prices greater than the ’grid rate’ - which averages around

0.22 per kilowatt for German households. The higher prices are subsidised by a surcharge each month on all German electric bills, and are guaranteed for 20 years after purchase.

This year, solar panel owners will be paid around

0.39 per kilowatt for panels up to 30kW, with payments decreasing in steps to around

The programme has been wildly successful, with more than 600 000 solar panel systems installed in Germany by the end of 2009 - providing approximately 2 per cent of Germany’s annual electricity consumption.

1 billion a year, and the government has decided the industry no longer needs such massive support. So despite howls of protest from Solar Valley, feed-in-tariff rates are expected to be cut for new customers by up to 16 per cent - starting as early as July this year.

In an attempt to overcome resistance to planned feed-in-tariff reduction, it was announced in April that

100 million would be made available for solar power R&D. German research minister Annette Schavan said that the money would be provided over the next three to four years and would target collaborations between private researchers and industry.

Nonetheless, Hubert Aulich, director of German operations for PV Crystalox Solar and chairman of Solar Valley Middle Germany - a cluster of companies, universities and institutes working together to promote business and research in the region - is not happy with the feed-in-tariff cuts, saying: ’it is too much too fast.’ Bagdhan also says he would have preferred to see the cuts held under 10 per cent. 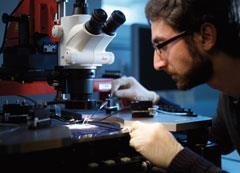 Looking for defects in solar cells under the microscope

As well as feed-in-tariff cuts, Aulich says the global recession and ever increasing competition from Asia-based firms, have weighed heavily on Solar Valley, with a 30-40 per cent plunge in photovoltaic prices eating heavily into manufacturer’s profits. ’There is no question that the dramatic price declines have had a big effect,’ he says.

For example, silicon module maker Sunfilm, with two locations in Solar Valley, announced in late March it had filed for bankruptcy as part of strategic realignment, a move it says was triggered by bad market conditions and planned cuts in feed-in-tariff rates. And Solar Valley mega-success story Q-Cells made a pre-tax operating loss of

Four of China’s largest solar cell companies - Suntech Power, Yingli Solar, JA Solar and Trina Solar - are now selling their technology in Germany. They are either selling cells direct to the consumer or components to Germany-based manufacturers. Solar cells from the Japanese firms Kyocera and Sharp are also available in Germany.

According to industry analysts EuPD Research in Bonn, Germany, 40 per cent of solar cells installed in Germany during 2008 were manufactured in China and Japan. Daniel Pohl, spokesman for EuPD, says that manufacturers based in China are particularly strong competitors, selling into Germany at low prices to establish footholds in the market. China-based firms are also helped by local tax breaks, plentiful investment, as well as lower labour costs.

Winfried Hoffmann, vice president of the European Photovoltaic Industry Association (EPIA) notes, however, that modules assembled in Asia often contain photovoltaic components produced in Germany or other European nations. ’A good portion of the [photovoltaic] value chain is still European,’ he says.

Looking to the future, Pohl says that competition and overcapacity will lead to a general consolidation phase that will result in the demise of not only European firms, but also Asian firms.

And in a bid for survival, Solar Valley companies are looking outside Germany, to cheaper locations, to manufacture their products. Q-Cells, for example, began production in Malaysia in 2009. Bosch Solar Energy is also planning to spread its wings: ’in the long run we, of course, are planning on establishing manufacturing capacities abroad. Having local production sites in attractive markets is a fundamental part of Bosch’s strategy to become one of the leading suppliers of photovoltaics worldwide,’ says von Hebel.

The next decade is going to be a battle for survival for photovoltaic companies, and technology will be Solar Valley’s most important weapon. ’Introduction of new technology needs to come and it needs to come fast,’ Aulich says. ’And improvement of technology is why Solar Valley was founded in the first place.’

Hoffmann says, ’it will be a challenging time.’ But noting an EPIA study that sees photovoltaic electricity providing up to 12 per cent of EU demand by 2020, up from less than 1 per cent today, he says: ’there is, for sure, huge potential.’

Key goals scientists are aiming for are increasing the efficiency at which the cells convert sunlight into usable energy, and driving down prices. Commercial silicon solar cells currently function with an efficiency rate of around 15 per cent, and can likely be pushed to over 20 per cent, says M?ller.

One way to achieve both these goals is to make thinner solar cells. Thinner silicon wafers translate into both lower material costs and higher efficiency, he explains. That is because electrons in the wafer material that have been excited by light only have a limited time to reach the contact, where the electric current is made. A thinner wafer means less travelling time, meaning that more excited electrons survive the trip to the contact and more electric current is produced, he says.

Solar cells can currently be manufactured at a thickness of around 200 m m. The goal of researchers is to reduce that to 100 m m, and according to M?ller this is not an easy task. ’Silicon is a very fragile material, and when it is thinner it breaks even more easily.’ Researchers have two main options to attack the thickness problem, improving the stability of the material or developing new handling methods for the production process, he says.

Another approach for improving efficiency would be to improve the silicon material to extend the lifetime of the excited electrons. ’Silicon technology still has a lot of room for further development,’ M?ller concludes.

At the same time as developing silicon cells, Solar Valley researchers will continue to explore second (thin films) and third (organic thin films) generation solar cell technologies. Solar cells based on quantum structures also hold potential, he says, ’but this is very far ahead, and would take decades to develop.’