Solvent from the sky

Nature's favourite solvent can also give great results in the lab, as James Mitchell Crow finds out

Nature’s favourite solvent can also give great results in the lab, as James Mitchell Crow finds out 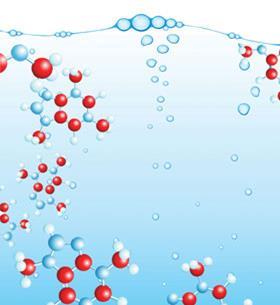 Mother nature’s solvent has its own chemical advantages

Is water the ultimate reaction solvent? Nature certainly seems to think so, and our bodies happily run the gamut of chemical transformations without a drop of dichloromethane or tetrahydrofuran. But synthetic chemists have traditionally shunned water, considering organic solvents a much more suitable reaction medium for most molecules, and often resorting to extreme lengths to keep all traces of water out of their round-bottomed flasks.

However, chemists - and chemistry-dependent industries - have come under increasing pressure to cut their organic solvent use. As well as being toxic and flammable, the vast majority of organic solvents are derived from crude oil, so are ultimately unsustainable. Most organic solvents are also volatile - a benefit when it comes to removing them at the end of a reaction, but a property which means they tend to end up in the atmosphere, where they can cause smog and trigger various health problems. Solvents can make up a significant proportion of the waste streams of many processes.

Water offers a readily available, cheap, non-toxic alternative. Over the past quarter century, many of the most widely used synthetic reactions have been shown to work in water - and these pioneering chemists have shown that, far from being a compromise, switching to water can greatly improve a reaction.

This potential for improvement - better selectivity, faster reaction rates, and higher yields - was first noted by Ronald Breslow, working at Columbia University in New York, US. Breslow’s seminal paper on hydrophobic acceleration of Diels-Alder reactions appeared in 1980, and had a dramatic effect on the field (see box p65, reaction a  ).1 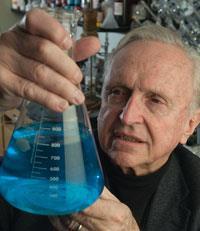 ’Breslow’s discovery that the Diels-Alderreaction in water is much faster than in any other solvent was one of the major events that got people interested in the whole area of reactions in water,’ says Chao-Jun Li, who researches water-based reactions at McGill University in Montreal, Canada.

The Diels-Alderreaction is a favourite among organic chemists, a carbon-carbon bond-forming reaction often used to build the cyclic structures found in complex target molecules sought by pharmaceutical companies. Breslow tried the reaction in water after noting that when non-polar compounds are dissolved in water - a polar solvent - they tend to aggregate, minimising their surface area in contact with polar water molecules. Breslow surmised that this ’hydrophobic effect’ might promote reactions where two non-polar substrates come together to react. In fact, the reaction he tried went three times faster in water than when the two reactants were mixed together neat.

’After that paper, everybody got very excited about using water,’ says Breslow. ’Water’s environmentally benign, but nobody realised that it might have advantages - and it does.’

He ascribes the rate-enhancing effects of water to the high energy interactions between polar water molecules and the relatively non-polar organic molecules being combined together in the Diels-Alderreaction. As the two molecules come together to form the transition state, they hide some of their hydrophobic surface from the water. This tips the energy balance in favour of reaction, speeding up the process.

Breslow has remained at Columbia, and continues to exploit water’s benefits as a solvent, more recently to develop enzyme mimics as reaction catalysts. ’We’re still using water, mostly in our studies of enzyme mimics, where we tend to use reactions in water to promote hydrophobic binding of the substrate, and even co-enzymes, into the enzyme mimic,’ he says.

A key concern that has historically stopped chemists trying reactions in water is that many organic molecules are too non-polar to dissolve in it - this was once considered a prerequisite for reaction - whereas they dissolve nicely in less polar organic solvents.

’One of the most common questions I’m asked is, if my compound is not soluble in water, how can I do the reaction?’ says Li. ’But in almost all reactions in water, if the reagents aren’t soluble in water, but float on top, the reaction works even better. This is a phenomenon that almost everybody working in the field has observed, but it was crystallised into the ’on water’ concept by
Barry Sharpless.’

Sharpless and his colleagues at the Scripps Research Institute in La Jolla, US, developed their ’on water’ theory after discovering a cycloaddition reaction which was around 300 times faster when the reactants didn’t actually dissolve in water, but instead floated in an oily layer on top.2 When they vigorously stirred the mixture, whipping it up into an emulsion, they found the reaction was complete in 10 minutes - whereas the transformation took 48 hours when the two starting materials were mixed together neat.

The reason for the dramatic rate enhancement that Sharpless observed was recently investigated by Rudolf Marcus, based at the California Institute of Technology (Caltech) in Pasadena.3 Marcus - who in 1992 won the Nobel prize for his research into the theory of electron transfer reactions - used a computational approach to peer into the water droplets in Sharpless’s flask. He suggests that, within the bulk solvent, every water molecule is engaged in a complex network of hydrogen bonds, reducing their interaction with any dissolved organic molecules. But in the layer of H2O molecules at the solvent’s surface, hydrogen atoms protrude out of the water droplet and dangle into the organic layer of reactants. These hydrogens don’t form part of the hydrogen bonding network, so are free to hydrogen bond to the organic reactants, catalysing the reaction. 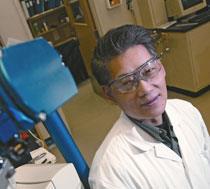 Li argues that the there is much more to water chemistry than faster, greener reactions.

’Replacing organic solvents with water is good, but we are doing a lot more that that,’ says Li. ’We try to explore totally new reactivity, to simplify synthesis. For example, by doing this, a 10 step synthesis could potentially be done in just one step, so you can save solvent for each reaction.’ Saving steps in a synthetic sequence cuts solvent use not just in the reaction flask, but also the solvent used to separate the product from reagents and by-products after each reaction.

’We look at the reactions that are traditionally very water-sensitive, but also need protection and deprotection [of other sensitive functional groups on the molecule]. We’re trying to develop chemistry that you can run in water and also that you don’t have to use protecting groups for.’

Li initially looked at ways to run Grignard-type carbon-carbon bond forming reactions in water, but has since moved on to examine new ways to couple together organic molecules in fewer steps.4 Most synthetic strategies to couple two molecules involve prefunctionalising them at the point that they are to be clipped together - for example, by installing a halogen atom. Li’s recent work is focused on coupling molecules by activating C-H bonds, meaning they don’t have to be prefunctionalised - saving more steps in the synthesis (see box, reaction b  ).

Li’s work is complementary to the discovery of water-compatible Lewis acid catalysts by Sh u  Kobayashi and colleagues at the University of Tokyo, Japan.5 Lewis acids are typically electron-poor metal-based compounds, favoured by synthetic chemists as a particularly mild way to trigger organic reactions. But the traditional Lewis acids are highly moisture-sensitive and will decompose in all but the most rigorously dried reaction solvent. Kobayashi found that Lewis acids based on rare earth metals - such as scandium triflate - are so moisture-stable they can be used in water. More recently, he found that such catalysts can be made chiral, showing that asymmetric reactions can also be run in water (see box, reaction c ). 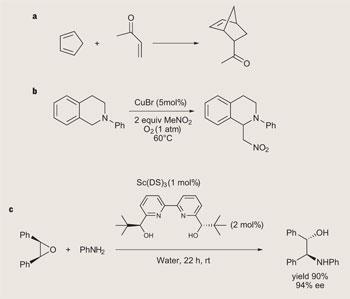 Work by Breslow (a), Li (b) and Kobayashi (c) greatly expanded the range of reactions that work in water

The results in the lab are impressive, but it’s industry that uses the most solvents, and has the biggest environmental impact. So will chemical companies embrace water? According to Breslow, there is a shift under way. ’It’s already clear that people use water if they can - companies are under tremendous pressure to do things in an environmentally friendly way, and have to use elaborate steps to capture any solvents.’ One particularly successful example is the paint industry’s shift from organic solvent to water-based paints, he adds. Using water means there’s no solvent vapour or solvent residues to deal with.

And the pharmaceutical industry has also adopted water-based chemistry, with Pfizer’s synthesis of pregabalin a notable success. Sold as Lyrica, pregabalin is a blockbuster prescribed for neuropathic pain.It earned Pfizer $1.8 billion
(?923 million) in 2007. Every step in the pregabalin synthesis is performed in water, with the key step an enzyme-catalysed process.

’While the pregabalin synthesis is very unusual, many drugs that are household names - including Viagra, Liptor, Crestor and Tamiflu - all have at least one chemical step in their synthesis that is performed in water,’ says Peter Dunn, green chemistry lead at Pfizer’s UK laboratories in Sandwich, Kent.

In the short term, pregabalin will have a significant impact on lowering Pfizer’s organic solvent use. ’By 2010, one kilo in every six of active drug that Pfizer makes will be pregabalin,’ says Dunn. ’This project alone has a huge impact on reducing the amount of carbon-based solvents that Pfizer uses.’

However, the success of the pregabalin synthesis has raised the profile of running reactions in water, adds Dunn. ’It has certainly increased the emphasis on biocatalysis, and the vast majority of those reactions are performed in water. Of course, you’ve got to be realistic, there may be other problems - we’re still going to be using carbon-based solvents for years to come. But the combination of the academic community, expanding the number of reactions that can be done in water, plus our effort in biocatalysis, is increasing the number of reactions that we do in water.’

Li agrees that water-based chemistry has a strong future. ’Of course, some reactions can’t themselves be done in water - but there is almost always an equivalent, for almost every kind of reaction, that can be run in water,’ he says.

The key to water’s wider adoption is a fuller understanding of the scope and limitations of reactions recently shown to be possible. This would mean chemists were confident to try a water reaction with their particular compound, because the same reaction with similar structures has already been shown to work. ’Water chemistry is only a very recent development, whereas traditional organic chemistry has been done for over 100 years,’ says Li. ’We don’t know what the limits of these reactions are, which is what we’re trying to explore right now in the field.’

’Chemists are often more comfortable working with organic solvents, because these reactions are better known and more established,’ adds Li. ’But many traditional synthetic chemists are now trying reactions in water, and are very surprised that they get such a good results - that’s happening more and more right now.’