Wealth from Greenland, honour from London

Not much is known about the early years of Danish chemist Hans Peter J?rgen Julius Thomsen, except that they were difficult. Then, while still in his twenties, he discovered and patented an industrial process which made his fortune. Nevertheless, he chose to continue with his academic researches - and a century after his death in 1909, Thomsen is remembered for groundbreaking achievements in thermochemistry which earned him the Royal Society’s Davy medal.

Thomsen was born in Copenhagen in 1826, and had a hard struggle to launch his career. English scientist and science historian Sir Edward Thorpe described him as a dour and resolute man who ’talked little about himself, even to his intimate friends - and least of all about the days of his youth.’ However, it seems he left high school prematurely without a diploma. Thomsen initially sought a job in a pharmacist’s shop, but was instead hired as a laboratory assistant at Copenhagen University - where Professor Edward Scharling encouraged him to study in his spare time. In 1843 Thomsen entered Copenhagen’s Polytechnic Institute, and after graduating in 1846 was employed there as a laboratory technician. From 1850 he also lectured there on agricultural chemistry.

In 1851 the distinguished Danish physicist Hans Christian ?rsted supported Thomsen’s bid for the chemistry chair at the University of Oslo (Christiania). It failed, but in 1859 Thomsen became an instructor at Denmark’s military academy, and from 1866 he was professor of chemistry at Copenhagen University (while still continuing to teach at the Polytechnic). He also held various civic appointments, and assisted in Denmark’s transition to metric measures and decimal currency. Accumulating jobs like this was commonplace in the 19th century. Many scientific posts were poorly paid, and scholars without private means usually needed several to support a family - Thomsen married Elmine Hansen, a farmer’s daughter from the Danish island of Langeland, in 1857, and their daughter Ellen was born in 1865. 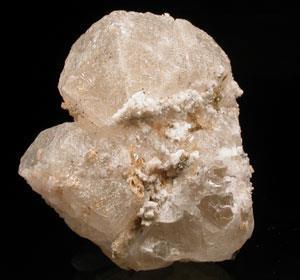 Thomsen grew wealthier by finding a use for a rare mineral from Greenland - then a territory of the Danish crown. Cryolite (sodium fluoraluminate, Na3AlF6) is colourless when pure, with a refractive index so close to water’s that its crystals appear to vanish when submerged. This (plus its low melting-point) explains its vernacular name - ’eisstein’ or ice-stone - of which ’cryolite’ is a classical Greek translation. Since the 1880s, molten cryolite has been used as the solvent in which aluminium oxide is electrolysed to produce metallic aluminium (it is now made synthetically, as Greenland’s deposits are virtually exhausted). However, it was economically unimportant when Thomsen discovered how to convert it to sodium carbonate - a vital ingredient for the glass, soap and textile industries.

To achieve this he heated cryolite with chalk - precise temperature control was critical - and dissolved the resulting sodium aluminate in water, leaving insoluble calcium fluoride behind. Bubbling carbon dioxide through the solution precipitated aluminium oxide, and a pure soda solution remained. Thomsen patented this technique in 1853, and was granted exclusive rights to mine cryolite in Greenland and exploit it in Denmark. Small-scale production began in 1857, and in 1860 he opened a large factory. After the more economical Solvay method for producing sodium carbonate arrived in the 1870s, Thomsen’s factory continued processing cryolite for other uses, including glass-making, enamelling, and eventually aluminium production.

Despite his industrial commitments, Thomsen remained active in research until retiring from the University in 1901. His primary interest was thermochemistry, and he made around 3500 calorimetric measurements, using sensitive instruments in a laboratory kept at a constant temperature. To ensure consistency he performed all observations himself, rather than delegating them to graduate students. But as a solitary investigator, he had no cohort of ex-pupils to support him when he was attacked by the French thermochemist Marcellin Berthelot. Their disagreement centred on an area which had already been problematic for chemists for nearly two centuries. 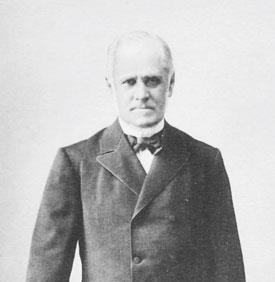 After the inverse square law of attraction brought order to the planetary orbits, many investigators hoped a gravity-like force would soon unify chemistry. Nevertheless, Thomsen complained that chemistry was still ’at a stage which reminds us of astronomy in the period shortly before Newton’. He struggled for decades to quantify the force of chemical affinity by measuring the heat emitted in chemical reactions. Others had tried before - including Germain Henri Hess, Pierre Favre and Johann Silbermann - but Thomsen’s experiments were more numerous, more precise, and more systematic, covering the gamut of chemical reactivity from acid-base reactions to the hydration of organic compounds. Berthelot (who also valued precision, but did not always achieve it) began his own thermochemical work shortly after Thomsen, but considered himself the primary authority in the field.

For years the two rivals measured heats of reaction and debated their significance. Their theoretical interpretations of these experiments were stimulating, but flawed. This was because they failed to incorporate a recently discovered (and then still imperfectly understood) physical principle. This principle - eventually codified as the second law of thermodynamics - decrees that some of the energy involved in chemical reactions always appears to go missing. Or as George Orwell might have put it, ’all energy is equal, but not all energy is equally available.’

Several physicists (including Rudolf Clausius and Josiah Willard Gibbs) played a part in establishing that the unavailable energy is tied up as entropy, a quantity reflecting the order, or disorder, of any physical system. (A relatively ordered system - for instance a crystalline solid at a low temperature - has low entropy. A more chaotic system - such as a gas at low pressure - has high entropy.) Chemical reactions inevitably involve entropic changes. Some are visible, like the precipitation of crystals or the effervescence of gases. Others occur only at the molecular level. Because of these events, the heat released to the environment - or to a thermochemist’s calorimeter - does not equal the total chemical energy involved in a reaction (though the discrepancy diminishes as the temperature approaches absolute zero and entropy becomes minimal).

Thomsen had come to terms with these new concepts by 1880. Berthelot resisted them for another decade. By then, both had been overtaken by younger chemists like Jacobus van’t Hoff, Svante Arrhenius and Wilhelm Ostwald, who applied the principles of thermodynamics to the energetics of chemical reactions with increasing sophistication. But although later workers modified or discarded his theoretical conjectures, Thomsen’s meticulous experimental work remained valuable. Its importance was recognised by the Royal Society of London, which awarded him the Davy medal (jointly with Berthelot) in 1883.

Thomsen also contributed significantly to the theoretical debate started by the discovery of the noble gases. In 1894 Sir William Ramsay and Lord Rayleigh separated argon from atmospheric nitrogen. It was chemically inert, and there seemed no obvious vacancy for it in the periodic table. More such gases soon emerged. Helium - already detected in the solar spectrum - was isolated in 1895. Neon, krypton, and xenon followed in 1898, while radon (previously called ’radium emanation’) was identified as a noble gas in 1904. But by 1895 Thomsen had already predicted the existence of an entire noble gas group in the periodic table (locating it between the halogens and the alkali metals) and had even calculated atomic weights for the undiscovered elements. His values for neon (20), krypton (84), xenon (132) and radon (212) proved very close to the actual ones (20.2, 83.8, 131.3 and 222)
when they were eventually measured. 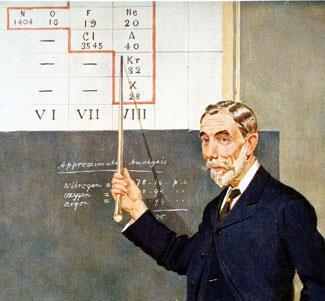 Thomsen’s reformulation of the table was influential. A large version of it hung in the chemistry lecture theatre at Copenhagen University, where it would have been a familiar sight to the young Niels Bohr. Long before Bohr began his historic researches with Ernest Rutherford, Thomsen had argued that ’the decomposition of elements into more elementary constituents is only a matter of time’ (an idea contemptuously dismissed by many contemporaries, including Berthelot). But it was Bohr who showed, in 1922, how the distribution of electrons around atomic nuclei determined the arrangement of the periodic table - a structure in which the noble gases have a special place, because of their fully occupied outer electron shells. Appropriately, Bohr used Thomsen’s version of the table to illustrate his paper.

Thomsen also predicted the existence of a still heavier noble gas with atomic weight 292. It remained elusive until the 1990s, when Russian nuclear physicists produced a few atoms of element 114, provisionally named ununquadium. Although its outer electron shell is incomplete, theoretical physicists believe relativistic effects should modify the behaviour of these electrons to give the element noble-gas properties. Ununquadium’s chemistry remains conjectural, but its atomic weight has been estimated as 289 - Thomsen may yet be vindicated.

Mike Sutton is a visiting fellow in the History division of Northumbria University, UK