Until recently, consensus was that detecting single molecules with light called for fluorescence techniques. Light, with its long wavelength in relation to the size of a molecule, interacts too weakly with such small objects. 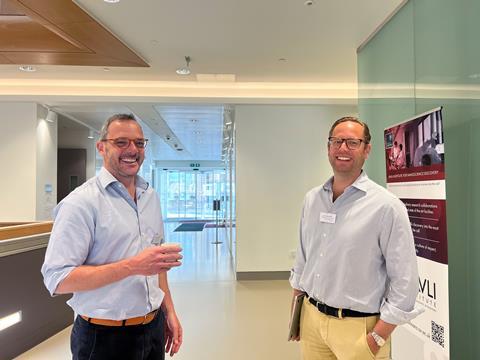 Refeyn’s cofounders, Philipp Kakura (L) and Justin Benesch (R) spun-out the company from their research groups at the Univesity of Oxford

So when Philipp Kukura at the University of Oxford, UK, showed that it is possible to detect the minute amount of light scattered by single biomolecules, it formed the basis for a wholly new addition to the bioanalytical toolkit.

Mass photometry relies on scattering: the interaction of light with electrons in molecules. Because the amount the light is scattered depends on the electron density of the material, and biomolecules are similar enough in their composition to mean that doesn’t vary that much from one to another, the amount of scattering can be calibrated to measure their mass.

The technique is simple enough that it has opened doors for researchers without in-depth optics experience. It allows them to measure mass in a benchtop spectrometer that is now being sold by a spin-out company, Refeyn. 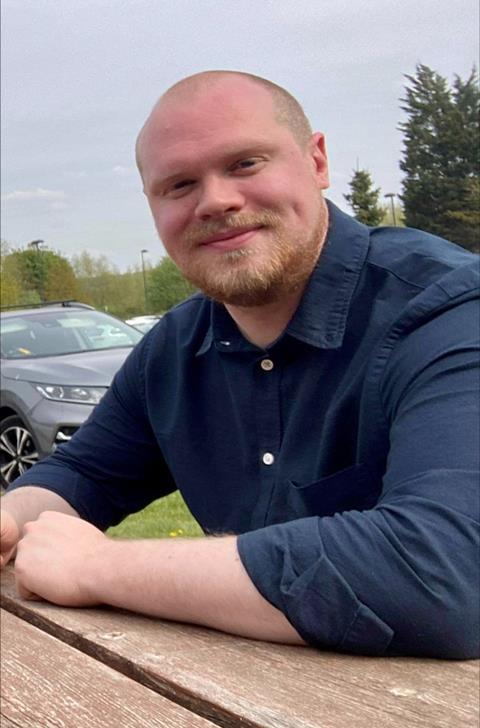 The role that mass photometry could play in life sciences was not immediately evident to Kukura, Refeyn’s founder and non-executive director. ‘The question at the time was, what are we going to do with this?’ Kukura says. ‘And that’s where Daniel Cole and Gavin Young came in.’

Cole, lead hardware architect at Refeyn, and Young, the research engineer whose work formed the basis for the paper that introduced the technology, developed some critical improvements. For example, adding a small window of silver in the detection path dramatically increased contrast – until the images of single molecules looked as good as those produced with fluorescence techniques. Justin Benesch, co-founder of Refeyn, then suggested that the technique could be used to measure the mass of individual biomolecules.

Once the quality had improved, the first attempts at measuring a variety of proteins showed good linear correlation. ‘The linearity is half of what makes mass photometry useful,’ Kukura says. ‘The mass of the measure is actually pretty close to the real mass, and factors like shape or solvent play a relatively small role.’

Before Cole, Young, Benesch and Kukura founded Refeyn, Cole turned the technology from the laboratory setup into a benchtop mass photometer roughly the size and shape of a shoebox. He presented the prototype at the Biophysical Society’s annual meeting 2018 in San Francisco, US. ‘It was a crazy time, Dan put the prototype together in a hotel room and ran these ultra-sensitive experiments on the bedside table,’ Kukura remembers. ‘There were a lot of, in hindsight, adventurous decisions, but it worked.’

Part of the goal of creating a standalone instrument was to make it usable by people who aren’t experts in high performance optical microscopy. Most of Refeyn’s instruments are now used by precidely those non-experts, Kukura says: ‘We thought the people that were going to get the most out of it are life scientists.’

Since 2018, Refeyn – named in honour of physicist Richard Feynman – has grown to 85 employees. The technology has also been recognised in several industry awards, including in the Royal Society of Chemistry’s 2019 Emerging Technologies Competition.

The applications for Refeyn’s mass photometers are broad. They can detect and characterise proteins, nucleic acids, lipids and sugars, providing information on structure, homogeneity, and function. Refeyn markets its instruments for use in sample characterisation, protein oligomerisation, biomolecular interactions, and macromolecular assemblies. 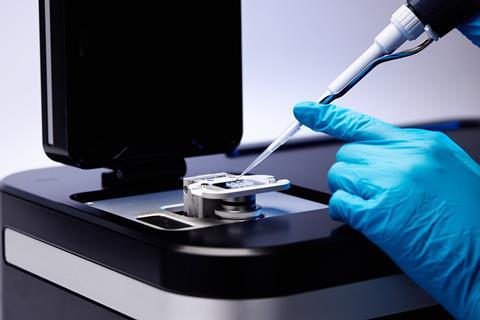 Matthias Langhorst, Refeyn’s chief product officer, says the team has been finding more and more uses along the way. Langhorst, who sold the first units himself, had a clear idea of who would need the instrument the most. ‘We knew, for example, the cryo-electron microscopy community had a big issue with purifying large protein complexes. We knew that protein production facilities struggled with those proteins where you don’t get good yield and they needed something that works on almost no sample,’ he says. ‘But during every demo we found two or more use cases for some institute or team at that university.’

More recently, for instance, the technique has been used to study the binding mechanism between the Sars-CoV-2 coronavirus and ACE2 receptors, which are thought to govern how the virus enters cells.

As far as applications go, Kukura says this is the tip of the iceberg. ‘[Mass photometry] is only three and a half years old,’ he says. ‘I think there are still enormous gains to be made in terms of what we can do with this’

Kukura’s targets are to keep increasing the range of applications, and improving the instruments’ resolution. To Langhorst, it’s important to maintain mass photometry as a technology that is easy to use. Making it complicated is ‘the one development avenue that we really don’t want to go down,’ he says. ‘When I watched the first demo and saw that you put a droplet on it, push a button and get something out – that’s what really appealed to me.’