13 July 2005: Chemical technique separates the sheep from the goats

A protein biosensor for discriminating between meat juices from the flesh of different animals has been developed by Swedish scientists.

A protein biosensor for discriminating between meat juices from the flesh of different animals has been developed by Swedish scientists. 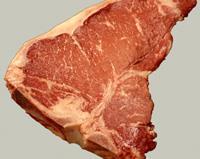 Jenny Carlsson and colleagues at the Universities of Link?ping and Lund based the sensor on a lectin panel immobilised on treated gold surfaces. Lectins are a broad class of structurally diverse proteins that bind specifically to carbohydrates and to the carbohydrate portions of glycoproteins via hydrogen bonds.

Self-assembled monolayers of hexadecanethiol prepared on 2mm diameter spots of microcontact-printed gold surfaces were used to immobilise biotin molecules in a multilayer system,. After the addition of streptavidin, which binds strongly to biotin, the biotinylated lectins were added to complete the final layer in a series of well-defined hydrophilic patches separated by hydrophobic barriers. The lectin portions resided on the surface and were available for binding.

Seven lectins with different carbohydrate binding specificities were employed as the biosensors. They were used to test fresh portions of beef, pork, lamb, chicken, turkey and cod from a local supermarket. The juices were obtained by centrifugation and filtering and applied directly to the sensors where the glycoproteins present were trapped by the lectins.

The thicknesses of the bound layers of the meat-juice proteins were measured by null ellipsometry and the values were treated by principal components analysis (PCA). The data were more repetitive for the mammalian juices, but the PCA plot showed a clear differentiation between all six types of meat juices, with no overlap. An approximate model based on artificial neural networks derived to classify the mammalian juices gave correct predictions in most cases.

The biosensor provides a simple technique that is faster and less expensive than current DNA-based methods. The researchers envisage applications in the food industry, to confirm meat identity and counter product adulteration. Expansion of the range of lectins would enable more types of meat to be analysed in this way. Steve Down