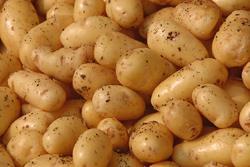 There is much publicised anxiety about the effects of GM crops on the environment and health. One major fear is that genetic modification that alters plant metabolism might produce new metabolites that are not fit for human consumption.

Potatoes are a crop potentially at risk. Derek Matthews and colleagues from the National Institute of Agricultural Botany (NIAB) and Advanced Technologies in Cambridge, UK, have studied the metabolism of GM potatoes containing two genetic modifications: an anti-invertase gene for lowering levels of reducing sugars, to diminish browning during cooking; and/or a gene for a maize-derived ribosome-inactivating protein (RIP) that gives higher resistance to the potato cyst nematode.

Potatoes naturally produce two types of toxic metabolite, glycoalkaloids and sesquiterpenoid phytoalexins. The team measured the amounts of these metabolites in GM potato tubers that had been exposed to a series of external infections and pests.

These changes in metabolite concentration were compounded by the effects of infection alone. In some cases, tuber blight, gangrene and bacterial wet rot induced elevated levels of both sets of metabolites in the non-GM and GM tubers. The overall effects were that levels of glycoalkaloids found in infected potatoes, both GM and non-GM, often exceeded the accepted threshold of 200 mg/kg by two- to threefold.

So are GM potatoes safe to eat? The UK Food Standards Agency told Chemistry World ’Potato glycoalkaloids are found to some extent in all potatoes, but glycoalkaloid poisoning is extremely rare.’

Nevertheless, Matthews urges caution. ’It is important that transgenic potato lines be assayed for these metabolites under realistic field conditions before they are approved for human consumption,’ he said.

Sue Mayer of GeneWatch, UK agrees. ’These results confirm that genetic modification can have unanticipated effects which may have implications for food safety or performance of the crop,’ she said. ’Currently, GM safety testing does not require compositional analysis to be conducted on plants subjected to stress.’ Steve Down