A rare American firefly has acted as a test case for the discovery of new natural products from a largely untapped source.

A rare American firefly has acted as a test case for the discovery of new natural products from a largely untapped source. 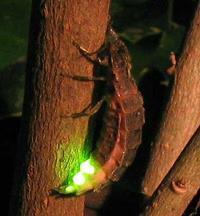 High quality data can be gathered from small samples

The search for new natural products with pharmaceutical activity from plant and animal species generally ignores the largest group of animals. Arthropods are the most numerous species on Earth, outnumbering all other kinds of animals combined, but the habitual scarcity of many species, and their small-size, limit sample collection.

In NMR spectroscopy - one of the main techniques for identifying unknown natural products - smaller samples can be analysed successfully using low-volume Shigemi tubes that afford two-fold sensitivity improvements. Now, US researchers from Cornell University and the State University of New York have improved the mass sensitivity further by employing a capillary NMR probe.

The team, led by Frank Schroeder at Cornell, is looking for entirely new chemical entities and used the technology to study the rare firefly Lucidotra atra. Whole-body extracts of 50 specimens were fractionated by HPLC and each fraction was analysed by capillary NMR. Very small volumes of a highly concentrated sample were injected into the flow cell, leading to the discovery of 12 new steroidal pyrones and one related steroid. Ten of the steroids had a trans-fused A-B ring system observed for the first time in steroidal pyrones isolated from insect sources.

The amounts of steroid in each fraction, 40-150 nmol, were below the detection levels for conventional NMR with Shigemi tubes, resulting in a threefold improvement in signal-to-noise ratio. The active volume of the flow cell is 3?L, compared with 0.5 mL in a conventional probe. ’The procedure is different but very simple,’ said Schroeder. ’Capillary NMR offers similar sensitivity to cryo probes but at considerably lower cost and without the technically challenging cryo support system of supercooled helium gas. Further design refinements will lead to additional sensitivity increases.’

A major advantage of the capillary NMR system is the very low level of artifacts in the spectra, which is probably caused by the high sample concentration and the small volume that contrive together to reduce solvent peaks.

Ian Sadler, director of the NMR spectroscopy unit at the University of Edinburgh, welcomes the work. ’This will enable good quality spectra to be obtained on much smaller quantities of material,’ Sadler told Chemistry World. ’It is also likely to have applications in the analysis of biofluids containing many different small molecule metabolites.’ Steve Down