Scientists in the US have developed a coating made of silica nanoparticles that will prevent fogging and could be used to harvest water in desert conditions.

Scientists in the US have developed a coating made of silica nanoparticles that will prevent fogging and could be used to harvest water in desert conditions.

Researchers at the Massachusetts Institute of Technology, US, led by Michael Rubner, have created superhydrophobic surfaces patterned with superhydrophilic regions that mimic the outer surface of the Namib Desert beetle, an animal that can collect water from moisture in the air. 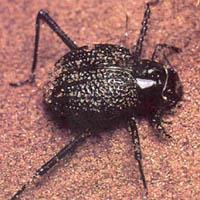 The researchers created a textured surface using polyelectrolyte multilayers - eight to 20 alternating layers of silica nanoparticles and polyallylamine hydrochloride. A rough surface is created by using conditions designed to make the silica aggregate.

The roughness enhances the hydrophobicity or hydrophilicity of the material, depending on the surface chemistry. In the case of glass, it becomes more hydrophilic.

Nanoparticles in the coating strongly attract water droplets and force them to form much smaller contact angles with the surface. As a result, the droplets flatten and merge to form a uniform, transparent sheet. ’We’re creating a nano-wicking system that sucks water in and draws it across the surface to form a uniform film,’ Rubner told Chemistry World. This prevents fogging and could be used on, for instance, bathroom mirrors or car windows.

The researchers added a hydrophobic layer to this rough surface. Hydrophilic regions were then created by dripping a polyelectrolyte solution onto the surface, which binds strongly where it dries, making that area hydrophilic.

The hydrophilic zones gather water that otherwise wouldn’t condense, in the same way that the Namib Desert beetle collects water to drink. The technology might one day be developed to produce coatings that people could use to collect water in arid environments.   ’If you have a [coated] tent in the desert you can harvest water from moisture in the air,’ suggested Rubner.

Experts predict several further applications. ’The ability to pattern superhydrophobic and superhydrophilic surfaces is especially powerful because it could mean the creation of microfluidic channels and devices on surfaces that can collect water and drive reactions on surfaces,’ said Paula Hammond, associate professor of chemical engineering at the Massachusetts Institute of Technology (MIT), US.
The coating is also anti-reflective. The rough texture traps air, creating a coating with a low refractive index. The coated glass lets through over 99 per cent of light, compared to other coatings that let 97 per cent through, said Rubner, who presented his data at the American Chemical Society national meeting in Washington DC, US. The extra few per cent is crucial in applications such as solar cell development, he said.

’This work provides a new opportunity for creating thin films on flexible surfaces like paper and plastic as well as glass that can be used as anti-fogging agents, self-cleaning surfaces that do not collect dirt. and other coatings on hard-to-coat surfaces like plastic, and might even be used to coat fibres or fabrics,’ said MIT’s Hammond.