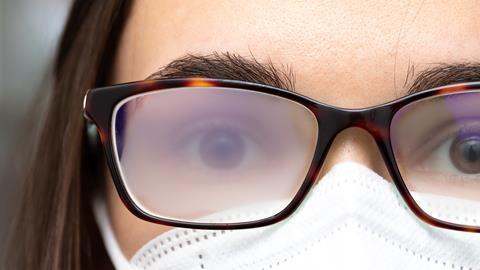 A transparent antifogging coating for glasses and other lenses that works by selectively absorbing the infrared wavelengths in sunlight has been developed by researchers in Switzerland. The material, which heats the surface to prevent condensation, is readily scalable and durable and could solve many issues that plague current antifogging technologies.

Fogging occurs when warm, moist air encounters a relatively cold surface, causing water vapour to condense. Most commercial antifogging coatings work by making the surface superhydrophilic, causing the droplets to spread out into a thin film. Unfortunately, such coatings also attract contaminants. An alternative is to make the surface superhydrophobic to prevent droplets from sticking at all, but this requires the creation of a nanopatterned surface. ‘It’s really hard to find a durable, scalable coating which is superhydrophobic on glass,’ says Iwan Hächler of ETH Zurich.

Hächler and ETH Zurich colleagues have now taken a completely different approach by dissipating energy from sunlight as heat, elevating the temperature of the surface and preventing condensation. Researchers have worked on such photothermal surfaces in the past, explains Hächler, but ‘either they’re quite dark because they absorb a large part of the visible solar spectrum or, if you go to the near-infrared – which makes up 50% of solar energy – then they’re quite narrowband.’ 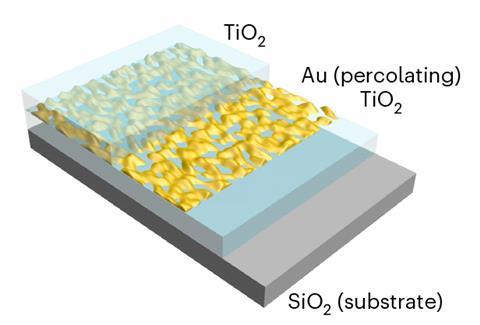 In the new work, they deposited a 5-6nm gold layer between two layers of titanium oxide by thermal evaporation – a standard commercial technology. The gold atoms naturally clustered into random islands. Gold itself is a strong plasmonic absorber of specific visible frequencies, but the absorption of a film less than 5nm thick is not significant enough to reduce the visible transparency. With the thickness of the gold chosen correctly, however, non-local plasmonic resonances in the near-infrared appear between the islands.

The same feature that makes the technology scalable also gives it broad spectrum absorption. ‘You have a combination of all sizes of particles such that you always find one that’s a good size to match with your wavelength,’ explains Gabriel Schnoering. ‘It’s a nanostructured material, but because of the statistical properties we are looking for, we can fabricate it using normal deposition methods.’ The result is a material that heats up by around 8°C in the sun, with peak infrared absorption around 40% while remaining highly transparent. ‘Even at very low sunlight intensity it’s still efficient,’ says Hächler. ‘The slightest temperature increase has a very strong effect on the likelihood of fog forming.’ 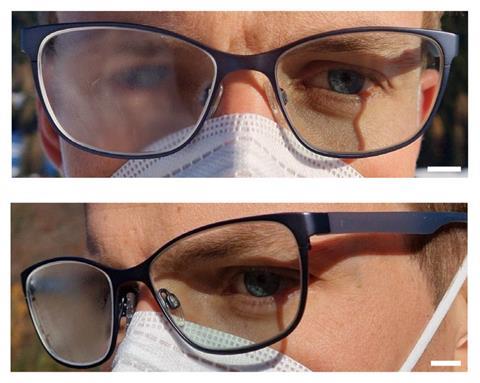 The left hand lens has been treated with the antifogging coating, while the right hasn’t

The researchers tested the material in a variety of practical applications, such as on the spectacle lenses of an FFP2-mask wearer and on polyester sheets taped to windows, and found performance far superior to control situations. They have filed a patent application.

‘It’s a really interesting, clever idea,’ says Gang Chen at the Massachusetts Institute of Technology. ‘People have used photothermal coatings in other scenarios – for example in anti-icing applications. They’ve seen that this idea could be used for, say, glass, and for that you have to have the film clear in the visible spectral range – and that’s new.’ He believes the approach should be readily scalable, although he foresees one limitation. ‘You need the existence of infrared light – so how effective will it be if you go from outside to inside, for example, in the dark?’

‘Few attempts have been made to show such near-infrared absorption while preserving some transparency of the visible spectrum,’ agree Ximin He of University of California, Los Angeles and Zhiyuan He of Beijing Institute of Technology. ‘This coating solves the problem of instability in high humidity environments existing in current anti-fogging strategies for transparent surfaces, which is of great practical significance.’