A cool way to store hydrogen?

Years of researching new ways to store hydrogen efficiently - a vital prerequisite for any ’hydrogen economy’ - have resulted in numerous exotic potential storage systems, from metal-organic frameworks (MOFs) to carbon nanotubes. But now theoretical chemists in the US have suggested a rather more commonplace solution: ice.

William Goddard, of the California Institute of Technology, and colleagues Tod Pascal and Christopher Boxe used complex quantum mechanical modelling coupled with high-powered statistics to investigate. They have now concluded that the common form of ice, made up of hexagonal crystals, could store hydrogen more effectively than existing materials.

’It sounds like a crazy idea, and we were very nervous about publishing it,’ Goddard says. ’But the simulations suggest that it could be a feasible approach.’ 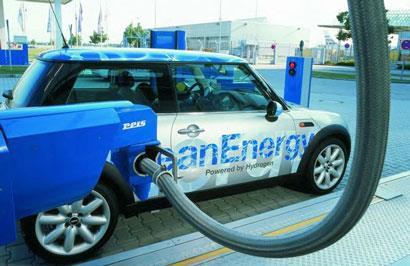 The idea came from modelling phase transitions of water. ’We noticed that when you heat crystalline ice, as it starts melting, a molecule of water comes out of the ice framework and whizzes along little channels present throughout the crystal structure. We wondered that, if these channels were big enough to accommodate water molecules, could they hold hydrogen?’

Goddard has used his modelling methods extensively in the past to accurately predict the hydrogen storage capacity of a range of new materials such as MOFs. The team’s calculations suggest that hexagonal ice crystals can hold 3.8 per cent by weight of hydrogen if the crystals are loaded at a temperature of 150K. This compares with 1.3 per cent by weight for the current best performing MOF. The hydrogen can be stored at a few degrees below freezing then released by melting the ice.

There would be a range of engineering hurdles to overcome, Goddard says. For example at the surface of the ice, the crystalline structure breaks down so the ice would need to be crushed before loading with hydrogen to expose fresh crystals.

But the systems needed to handle the ice and hydrogen would add weight and reduce the efficiency of the system, he says. ’Furthermore, creating a system with high surface area ice, and maintaining it, would not be straightforward,’ he says. ’Clearly corroboratory experiments will need to be performed.’