US team creates compound with the highest coordination number yet seen

US researchers have broken the record for a compound with the highest coordination number - the number of neighbours an atom is capable of binding to. The compound, a thorium aminodiboranate, Th(H3BNMe2BH3)4,   has a central thorium atom bound to 15 separate hydrogens, beating the previous record, held by several other compounds, by one.

The compound’s high coordination number relies on thorium being extremely large and hydrogen atoms extremely small. ’What we have done is figure out how to make a compound in which the thorium forms bonds only with hydrogen atoms,’ says Girolami. There are only three other thorium compounds that can manage this, but the coordination number of one is 12 and for the other two remains unknown. ’We also used a coordinating group that is compact and chelating, [so] binds to the thorium atom by means of four hydrogen atoms, and these features enhance the stability,’ Girolami explains. 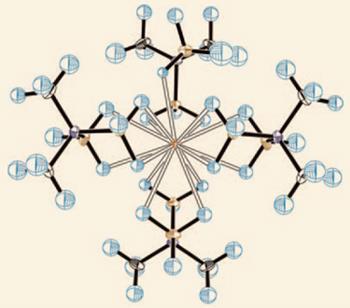 While the new compound  has no immediate practical applications, high coordination numbers are useful, says Girolami, for keeping metal complexes ’in splendid isolation’, which in turn enhances other properties such as vapour pressure, which is useful in applications such as metal deposition from the gas phase.

’It is a very pretty structure that is perhaps more of a chemical curiosity than anything else - although there is nothing wrong with that!  Overall it is a very nice piece of work.’