Scientists in China have developed a new surface-based catalyst that can selectively oxidise carbon monoxide to carbon dioxide in the presence of hydrogen - making it potentially useful for hydrogen fuel cells, where carbon monoxide can poison the platinum electrodes that are used in the cell.

More significantly, however, is the fact that the researchers designed the catalyst from theoretical predictions - something that is notoriously tricky to do with surface-based catalytic systems. The catalyst is made by creating ’nanoislands’ of ferrous oxide, around 3-5nm across, on a platinum surface by evaporating iron on to the surface in the presence of oxygen. Ordinarily the iron would oxidise to its ferric state. However, powerful adhesion forces between the ferrous oxide and the platinum surface result in a phenomenon called ’interface confinement’, where the FeO is stabilised.

In this state it is coordinatively unsaturated - it has spare bonding capacity. The researchers demonstrated that the edges of the islands - the shoreline as it were - contain coordinatively unsaturated ferrous (CUF) sites that are able to dissociate oxygen molecules into atomic oxygen. Carbon monoxide adsorbs to the surface of the platinum and is oxidised at these CUF sites. 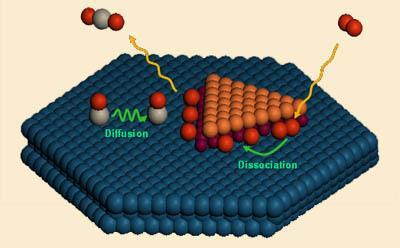 Stable nanoislands of ferrous oxide sit on a platinum surface. CO is oxidised at CUF sites around the shoreline

The team showed that the system could oxidise carbon monoxide in the presence of a stream of hydrogen - something that could be useful for preventing the poisoning of platinum in hydrogen fuel cells.

’Using this simple concept and strategy the coordinatively unsaturated metal sites could be easily fabricated on solid surfaces and used in many heterogeneous reactions,’ says team member Xinhe Bao, of the Dalian Institute of Chemical Physics.

Renald Schaub, a surface scientist at the University of St Andrews in the UK, notes that most surface catalytic systems have been developed with little fundamental understanding of the underlying phenomena. ’Surface science is all about trying to relate the structure of a catalyst with its reactivity, selectivity and stability. This work has achieved this brilliantly. It shows that you can develop a new catalyst based on rational and intelligent design.’