Chemistry textbooks may have to be rewritten after scientists in the UK showed that an exotic type of ice crystal formed from supercooled water has probably been misidentified and might not exist. The findings have implications for our fundamental understanding of ice formation and for mathematical models of the atmosphere, where ice clouds are believed to play a key but, as yet, poorly understood role.

’Ordinary’ ice crystals are termed hexagonal - a feature of the way layers of atoms are stacked in the crystal, which gives snowflakes their six-fold geometry. However, pure water can be supercooled to temperatures close to -40oC before it freezes spontaneously and, in these circumstances, a second form of ice, ’cubic’ ice, can form - with its structure again dictated by its atomic stacking. Cubic ice is metastable and generally relaxes to form its hexagonal counterpart. Cubic ice has been created in many laboratories over the years and has also been identified in clouds in the colder regions of the atmosphere. 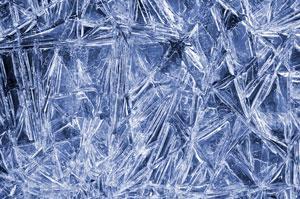 But now a team led by Benjamin Murray at the University of Leeds has carried out work that suggests that cubic ice may not in fact exist. The researchers searched for cubic ice by suspending water droplets in oil and gradually cooling them to -40oC while observing the x-ray diffraction pattern of the resulting crystals. ’We modelled the diffraction pattern we obtained and compared it to perfect cubic and perfect hexagonal ice, and it was clearly neither of them,’ Murray says. ’Nor is it merely a mixture of the two. Rather it is something quite distinct.’

Analysis of the diffraction data shows that in the ice crystals the stacking of the atomic layers is disordered. ’The crystals that form have randomly stacked layers of cubic and hexagonal sequences,’ Murray says. ’As each new layer is added, there is a 50% probability of it being either hexagonal or cubic.’ The result is a novel, metastable form of ice with a stacking-disordered structure.

Re-examination of what had previously been identified as cubic ice suggests that this was stacking-disordered structures too, Murray says. ’Cubic ice may not exist.’

The key question for cloud physics, says Chris Westbrook, of the department of meteorology at the University of Reading, UK, is whether this disorder in the frozen droplet has an effect on the eventual shape and surface properties of the much larger crystals that grow from them. ’That will determine whether this process is important for understanding the effects of clouds on climate and precipitation.’