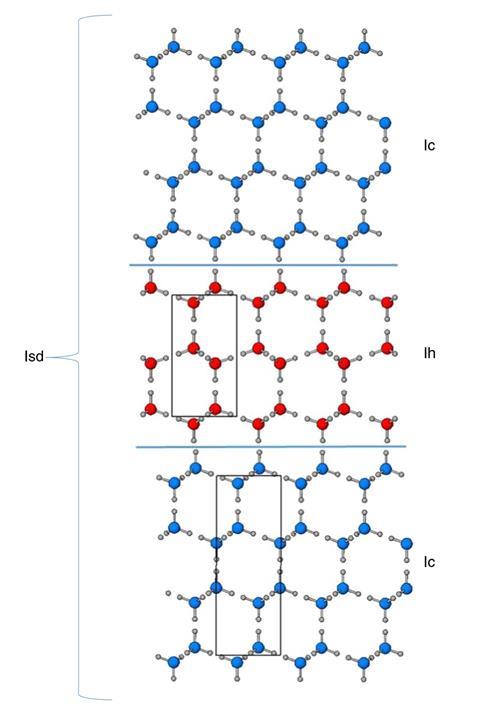 Graphical illustration of of the atomic positions of ice lsd, which features both cubic or Ic ice and the much more common hexagonal or ice Ih. Researchers have now created extremely pure cubic ice in the lab

For the first time, researchers have synthesised large quantities of a rare form of ice with a cubic crystal packing structure.

There are at least 18 known forms of water ice – but only two of these occur naturally on Earth. Under atmospheric pressure, liquid water usually freezes to make ice Ih – a highly stable form with a hexagonal crystal structure. Another much less common form of ice, which might form naturally in the upper atmosphere, is called ‘cubic ice’ because of the three-dimensional symmetry seen in its crystal structure. This cubic ice, ice Ic, can also be made using different techniques in the lab, for example by freezing nanodroplets of water suspended in an oil matrix. But the ice produced by these methods is never completely cubic in structure. Instead, it contains stacking defects, meaning that what is formed is really a combination of ice Ih and ice Ic known as stacking-disordered ice, or ice Isd.

Now, a team led by Leonardo del Rosso and Lorenzo Ulivi at the University of Milano–Bicocca, Italy, has found a way to synthesise large quantities of defect-free, fully cubic ice. The method involves heating a powder of an unusual porous form of ice known as ice XVII – a metastable phase of ice, in which water molecules are arranged in pentagonal rings. As the powder of ice XVII is warmed above 160K, it rearranges into a structurally pure phase of ice Ic.

The Milan team believes that ice XVII’s low density, open structure is key to enabling the high purity cubic ice to form, as it allows the water molecules the freedom to reorganise as the ice is warmed. The team says that its findings offer new possibilities for ‘the clarification of fundamental questions in ice physics’.