Single-walled carbon nanotubes (SWCNTs) exist in both metallic and semiconducting forms, but many of the applications of the materials require either one type or the other, making separation increasingly important. Until now, separation has often required techniques that can damage the samples and has only been achievable at the scale of micrograms. This makes purified nanotubes very expensive. 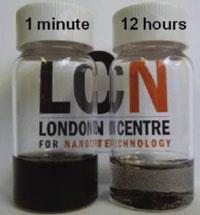 You can buy separated nanotubes in tiny quantities, explains Milo Shaffer, head of the London Centre for Nanotechnology at Imperial College London, UK, but that’s ’at a cost equivalent to $1b/kg; unfortunately scaling the existing processes is intrinsically difficult.’ Shaffer and collegues have now developed a new method that should make bulk separation of nanotubes possible at an industrial scale.

The method to separate nanotubes started out with an observation by colleagues of Shaffer’s, Chris Howard and Neal Skipper at University College London, UK. They discovered that charged carbon-60, or Buckminster fullerenes, an allotrope of carbon related to CNTs, could be dissolved in ammonia.1

This led of a collaboration between the two labs, which resulted in a simple and effective way to separate metallic and semiconducting SWCNTs. Separation and purification of the nanotubes begins with the nanotubes being dissolved in a sodium-ammonia solution.2 The sodium metal provides electrons that are solvated in the ammonia, which help unbundle the nanotubes making, in essence, an ammonia solution of sodium ’nanotubide’.

The next step is to remove the ammonia, leaving behind a dry powder of the nanotubide salt, before adding dry dimethylformamide to the powder, which spontaneously dissolves. Or rather, a portion of the salt dissolves.

The team - Milo Shaffer, Neal Skipper, Chris Howard, and Sian Fogden - has shown that, by tweaking how much sodium is in the sodium-ammonia solution and, therefore, how many electrons are available to the nanotubes, the fraction of the sodium-nanotubide salt that spontaneously dissolves in dimethylformamide is mostly metallic SWCNTs. This suggests that separation could be managed using just the different electronic characteristics of the nanotubes with no need for ultrasound or centrifugation, which can often damage the nanotubes.

’This is a very interesting piece of work as the separation of metallic and semiconducting single-walled nanotubes is fundamental to the use of nanotubes in a variety of electronic and sensing type applications,’ says Karl Coleman, 2011 winner of the Chemistry World Entrepreneur of the Year Award and a nanotechnologist at the University of Durham, UK. ’There are many different methodologies in the literature that can achieve separation but the work here has the additional benefit of being potentially scalable. There is still plenty to be done as, in the grand scheme of things, the work still discusses milligrams and it remains to be seen whether you can use this methodology for kilograms.’

The team has now licensed the technology and its patents to international gases and engineering firm Linde.