US researchers have developed a new polymer-based gel that can rapidly change colour in response to a range of triggers, including temperature, humidity and salt concentration. The photonic gel could lead to a variety of applications including sensors and display devices, the researchers suggest.

Edwin Thomas’s team at the Massachusetts Institute of Technology made a self-assembling gel consisting of alternating layers of two polymers, hydrophobic polystyrene and hydrophilic poly-2-vinyl-pyridine (2VP). The key property of the material is that the 2VP has a positively charged backbone and can swell to more than tenfold its original volume in water. If salt ions are then added to the water the positive charges are neutralised and the chain collapses. Remove the ions, the backbone charges are exposed to each other and repel, causing the chain to expand once more. 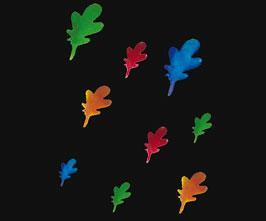 Photonic gel crystals demonstrate the ’tunability’ of materials made from alternating layers of hard and soft polymers. The soft polymers are easily swollen with liquid or vapour causing the materials to reflect different colors of light based on the way their molecules are chemically ’tuned.’

The polystyrene layers constrict the 2VP so that it can swell in one dimension only. The team demonstrated that the gels are also sensitive to pressure, humidity and temperature.

As the thickness of the gel changes, the layered structure’s optical properties alter dramatically, enabling it to reflect light selectively across the spectrum from ultraviolet through to infrared.

One immediate potential application that the researchers suggest is as a humidity sensor for foods that need to remain dry. If water entered the packaging the gel would swell and the sensor would change colour.

Commenting on the research, Ifor Samuel, a photonics expert at the University of St Andrews, UK, told Chemistry World that the simple assembly and tuning range of the gel is a ’surprising and interesting result’. ’The ideal way of making tiny structures is for them to make themselves. Self-organisation of materials to make controlled structures is an important scientific and technological goal.’

But Samuel added that using an electrolyte is not ’a particularly convenient way’ of controlling the gel’s optoelectronic properties.