As policymakers rush to promote biofuels, researchers are hoping the US can break its obsession with corn ethanol.  Fermenting ethanol from corn sounds an attractive way of supporting local agriculture, improving energy security by reducing dependence on imported oil and denting fossil fuel carbon emissions. But scientists warn that corn-based ethanol can’t realistically cut carbon emissions or gasoline usage. A comprehensive study published in Science  in July last year concluded that if every ear of corn produced in the US in 2005 were turned into ethanol, just 12 per cent of gasoline demand would be met; the net energy costs saved after crop harvesting would be a slim 2.4 per cent. 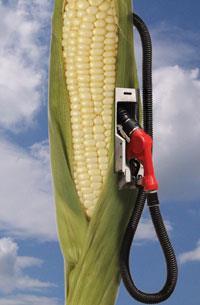 This hasn’t stopped US ethanol producers happily gobbling up corn, galvanised by high (though falling) oil prices and generous tax credits. In 2006, five billion gallons of ethanol were produced, according to Keith Collins, chief economist at the US department of agriculture - close to Brazil’s ethanol output last year. But Brazil’s ethanol serves a much smaller and relatively fuel-thrifty population, is obtained from high yield sugarcane, and passes through a well developed distribution system. Last year’s US ethanol accounted for just over two percent of gasoline consumption while using up 20 per cent of the corn crop. Lester Brown, of the Earth policy institute, thinks that by 2008 as much as half of the US corn crop could be used for ethanol, despite uncertain carbon emission savings.

If that’s good news for farmers in the US corn belt, who saw their crop price hit a ten-year high earlier this year, it’s not so good for the tens of thousands of Mexicans protesting against a 400 per cent rise in the cost of tortillas in January. Other food crops may become more expensive as they replace less affordable corn imports in poorer countries, warns Brown. Commentators worry also about the environmental sustainability of intensive single-crop farming for fuel.

Nonetheless, in his 2007 state of the union address, US president George Bush demanded the production of 35 billion gallons of renewable fuels by 2017, while the US department of energy’s target of meeting 30 per cent of 2004 motor gasoline demand by 2030 requires 60 billion gallons of biofuels. In Europe, the Biofuels research advisory council has suggested that by 2030 up to a quarter of the EU’s transport fuel needs could be met by carbon-efficient biofuels.

Corn and other food-crop biofuels won’t meet that kind of capacity, researchers agree, although their use has built up ethanol-producing experience. The real saviours will be the ’second generation’ renewable fuels created from the sugars locked up in woody cellulose, lignin and hemicellulose, stored in plant waste such as straw, corn stalks, and prairie grasses. These could significantly cut greenhouse gas emissions, since they require far fewer energy inputs to grow, and would leave food stores intact.

Unfortunately, cellulosic polymers are much harder for bacteria to break down to ethanol than simple starches and sugars. The greatest challenges include reducing the costs of necessary cellulose pre-treatment, and developing enzymes to subsequently hydrolyse the cellulose before the resulting sugar is fermented and distilled.

Plenty of companies are hoping to commercialise the traditional fermentation route. Iogen’s small pilot plant in Ottawa, Canada, has produced cellulosic ethanol since 2004; Abengoa, already a large ethanol producer, is building a demonstration cellulosic ethanol plant in Salamanca, Spain, to open in summer 2007; Du Pont and Broin have announced that a commercial-scale plant planned for Emmetsburg, Iowa, US, will begin production in the next four to six years; SunOpta is working with Celunol to produce ethanol from sugarcane waste and wood in Louisiana, US, this year.

There are numerous other options, but how long before any come to commercial fruition remains to be seen. Despite high capital costs, Charles Wyman of the University of California, Riverside, US, told Chemistry World  that cellulose technology could be commercialised now if investors would take the risk or government provide more policy and financial assistance. That breakthrough may happen in the next five years; for critics of the US love affair with corn, it can’t come soon enough.