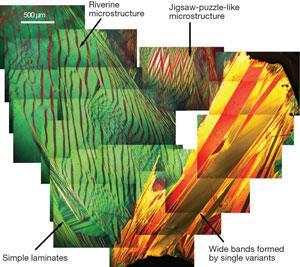 US researchers have shown that they can predict compositions that greatly delay degradation and failure in alloys that undergo a temperature-induced phase transition, such as shape memory alloys. These materials are already used for medical guidewires and stents that start small and are heated to expand to their final shape. Their potential is greater still: alloys that transition reversibly between non-magnetic and highly magnetic forms can generate electricity directly from heat. Magnetically-driven phase transitions can produce cooling that could provide more efficient refrigeration methods.

However, as the alloy changes phase a stressed transition layer separates the phases and can create cracks and defects. In the most common shape memory alloy, NiTi, this causes hysteresis – where the material’s past environment, as well as its present one, affects its properties. This effect shifts the transformation temperatures by up to 20°C within 20 heating–cooling cycles. Such hysteresis has been seen as innate to large or ‘first-order’ phase transitions, explains Kaushik Bhattacharya from the California Institute of Technology. ‘But hysteresis leads to failure,’ Bhattacharya notes, ‘so material design and selection has been balancing robustness and hysteresis.’

Through in-depth mathematical analysis, Richard James’ team at the University of Minnesota has largely eliminated the transition layer. ‘If the lattice parameters satisfy some very special relations, then we expect we’ll achieve greater reversibility,’ James tells Chemistry World. Measurements had previously shown Zn2 AuCu was near these conditions, so the team prepared seven variants where they slightly changed the metal proportions. They found that Zn45 Au30 Cu25’s transformation temperature shifts less than 0.5°C after 16,384 thermal cycles. ‘Normally, the transition layer is quite distorted and stressed,’ he says. ‘In our alloys it is completely stress-free, because the phases fit together perfectly in many ways.’

Bhattacharya, who has previously worked with James, but not on this study, calls the low hysteresis levels ‘remarkable’. ‘This work demonstrates a strategy of decoupling hysteresis and extent of first-order phase transformation,’ he adds. ‘Typical theories of hysteresis attribute it to pinning by defects. This, however, develops and demonstrates an alternate scientific paradigm in which hysteresis is linked to mechanical compatibility.’

James highlights that the success of the analysis method is more important than the specific alloy. ‘It’s unlikely that people would use an alloy with 30% gold in it,’ he laughs. ‘But if we could find a phase-change material that beats NiTi that would be a major breakthrough. There’s nothing in the theory that says it even has to be a metal. It should be a generic way to make phase transformations reversible.’