Aluminium is the most abundant metal in the Earth’s crust and is used to make bikes, cars and food cans. Now, thanks to research conducted at the University of Nancy, France, the metal may also be able to shed light on the processes that occurred during the formation of the solar system.

CAIs and chondrules often appear in the same meteorites, but studies suggest that chondrules were actually formed some two million years after CAIs. While CAI formation has been accurately dated in the past, there is less certainty in the data collected on chondrules, causing some doubt as to whether this age difference is in fact true.

Not only have Johan Villeneuve and co-workers now shown the age difference is real, they have also identified five discrete chondrule formation events that occurred over a period over several million years rather than through a single cooling event. This finding lends weight to one of the more popular chondrule formation theories that suggests they were formed by rapid heating and cooling as shock waves passed through the material from which the solar system formed.

It has been known for some time that 26Al was present in the early solar system, and many cosmochemists have relied on levels of 26Al to date meteorites. But the validity of this method remained in some doubt as it could only be applied if the aluminium isotope was distributed evenly across the solar system as it was formed - which couldn’t be confirmed by existing data.

Villeneuve and co-workers have now found evidence that supports the use of the radioactive aluminium isotope as a way of precisely dating objects formed during the first few million years of the solar system.

26Al has a half life of 0.73 million years and radioactively decays to form 26Mg with the loss of a beta particle, enriching the ratio of this heavy isotope with respect to the more commonly occurring 24Mg. 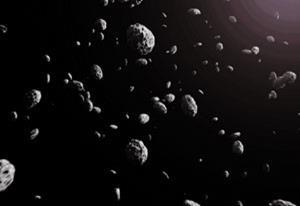 The main focus of Villeneuve’s studies was the Semarkona meteorite which fell in India in 1940 and had remained relatively unaltered since its formation some four billion years ago.

To accurately determine the isotopic composition of the Semarkona chondrules, Villeneuve used an ion microprobe secondary ion mass spectrometer (SIMS), which functions much like a microscope but detects ions rather than light. By using high beam currents and paying particular attention to background detector noise, the researchers managed to make 26Mg/24Mg measurements that were accurate to within 5 parts per trillion.

Andrew Davis, an expert in using SIMS to characterise stellar material at the University of Chicago (who has an asteroid named after him), believes that most people using SIMS will be surprised at the accuracy that Nancy team has achieved.

By plotting the initial 26Mg composition at the time of each object’s formation against the 26Al/27Al ratio, Villeneuve showed that the chondrules in the Semarkona meteorite were formed from the same material as the Earth and the CAIs, but all were formed at different times.

This is significant, says Davis, as it is ’a significant step to showing that the ratio between 26Al and 27Al was uniform in the early solar system,’ and will reassure those researchers who have used this method to determine the age of objects when no other method had been available.