Despite investment, the outlook for US competitiveness has deteriorated over the last five years, says influential report

An influential US National Academies committee that sounded an alarm five years ago about the precarious position of American leadership in science and technology has renewed its call to action. 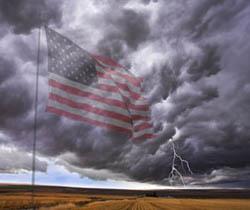 The outlook is stormy for US science

The original Gathering Storm report, released in 2005, urged the federal government to bolster primary education and double the federal basic research budget. It attracted congressional and public attention, helping to secure in last year’s economic stimulus package billions of extra dollars for science agencies in 2009 and 2010.

In an update of the report released on 23 September, the committee revisits the issue of US competitiveness and concludes that despite some progress and ’occasional bright spots’, the situation is worsening.

The nation’s outlook has ’deteriorated’ over the past five years, in spite of government and private sector efforts to address the problem, the committee finds. It notes that the growth of the national debt over this period, from $8 trillion to $13 trillion (?5 trillion to ?8 trillion), has made it much harder to address this problem.

At the same time, the report cautions that other countries are showing significant progress, making it more difficult for the US to compete for new factories, research laboratories, and jobs.

As proof that the US’ competitive capacity is slipping, the committee notes that 51 per cent of US patents were awarded to foreign companies in 2009, and that China has overtaken the US as the top high-technology exporter and now ranks second in publication of biomedical research articles.

The report’s authors highlight the need to institutionalise  oversight and funding to implement the original Gathering Storm recommendations, and they urge Congress to reauthorise the America Competes Act, which put physical science agencies on a 10-year budget-doubling trajectory.

The American Chemical Society (ACS) agrees with the overall conclusions of the National Academies panel. ACS spokesman Glenn Ruskin calls the last five years ’a mixed bag’ in terms of the US response to the competitiveness challenge.

The nation has increased investments and focus on scientific research and education, but Ruskin says these challenges need to be addressed in ’a more long-term oriented way, rather than through sudden bursts of positive energy,’ like the one-time funds provided through the economic stimulus package.

The issue appears to be on the Obama administration’s radar. On 21 September, Vice President Joe Biden met with the presidents of six leading US universities to discuss the scientific advances made possible by the stimulus package.

Biden said the federal government funds 60 per cent of all basic research in the country, but noted that federal research and development spending has dropped steadily since 2004. ’We can’t afford to lag behind the rest of world,’ Biden said. He highlighted that the US ranks only eighth in the world in R&D investments as percentage of gross domestic product - behind countries like South Korea and Japan.