Ammonia freezes up under pressure 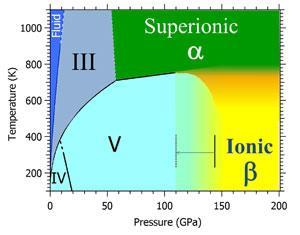 Researchers in France have shown that when molecular ammonia is put under enormous pressure, it becomes unstable and then forms a solid ionic ice.1 The change was first predicted in 2008 by theoretical calculations, but until now it had never been shown experimentally.

At room temperature and pressure ammonia (NH3) is a gas. Its low temperature ice form is a typical molecular crystal, with weak hydrogen bonds between molecules, much like water ice. But ammonia behaves differently elsewhere in the universe where temperatures and pressures are extremely high, such as in the cores of the gas giants Neptune and Uranus. A team led by Sandra Ninet and Frederic Datchi at the Institute of Mineralogy and Condensed Matter Physics recently showed that at temperatures above 750K and pressures beyond 60GPa, the molecules dissociate to form ‘hot ice’ – a superionic phase composed of NH3, NH4+ and NH2- that behaves simultaneously as a solid crystal and a liquid.2

In 2008, theoretical simulations predicted that low temperature ammonia could also enter an ice phase containing alternating layers of NH4+ and NH2- ions, at very high pressures.3 Now, Ninet and Datchi have found strong evidence that supports this theory. They used a diamond anvil cell to squash room temperature ammonia at pressures up to 194GPa, over 1.5 million times atmospheric pressure.

‘Above 150GPa, strong changes in the experimental IR and Raman spectra are observed, indicating a transition to another high-pressure phase,’ they write in a paper published on the preprint server arXiv. ‘The IR band around 2500cm-1 cannot be due to molecular NH3, which therefore implies the presence of NH4+ ions.’

The spectra agree only partly with previous theoretical predictions, however, as they confirm ammonia’s ionicity but do not match up with the crystal structures suggested in the structural model. Further calculations, guided by the experiments, have helped the team refine the model and suggest that the high pressure ionic phase contains two different crystalline forms.

‘It is pleasant that the prediction has been at least partly verified by experiment,’ says Artem Oganov from the State University of New York in the US, whose group also study materials at high pressure. ‘Spontaneous ionisation seems to be a rather common phenomenon under pressure – it probably happens to soften interatomic repulsions and reduce the average atomic volume.’ He adds that these findings could help improve understanding of the conditions inside giant gas planets made of ammonia, methane and water.

Ninet, Datchi and colleagues now plan to refine ammonia’s phase diagram by exploring the boundary between its ionic and superionic phases.