Researchers in the US have uncovered an intriguing electrochemical partnership between two bacteria, which boosts their combined ability to generate an electric current when they are grown in a bioelectrochemical reactor. The work could lead to more efficient reactors, as well as throwing light on the ecological relationship between microbes in the wider environment.

Certain microbes can metabolise organic waste in a way that releases electrons, which can be transferred to an electrode and used to generate electric power or in electrochemical reactions to make useful products. One common bacterium that has been investigated in such bioelectrochemical systems is Pseudomonas aeruginosa.  In some natural environments, such as marine sediments, P. aeruginosa is found to be associated with another microbe, Enterobacter aerogenes. On the face of things, such a partnership appears unlikely as each bacterium has apparently different metabolic preferences. Now, a team led by Lars Angenent at Cornell University, Ithaca, has shown why these organisms can live in harmony in an energetically efficient way.

’We found that when you feed a sugar such as sucrose to the mixed colony, this is fermented by E. aerogenes and one of the fermentation products is 2,3-butanediol,’ says Angenent. ’This in turn is a substrate for P. aeruginosa. But not only does the alcohol act as a nutrient for Pseudomonas, it also stimulates it to produce redox mediators called phenazines.’ 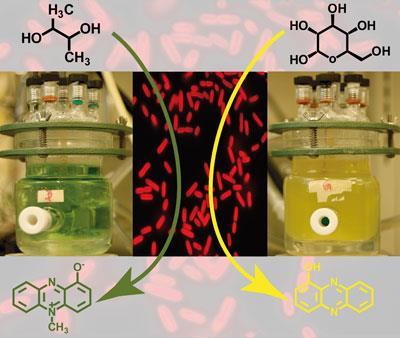 The current produced by a culture of P. aeruginosa with 2,3-butanediol (left) was increased two-fold compared with glucose (right) as the carbon source, owing to enhanced phenazine production

Phenazines are three-ringed nitrogen-containing compounds that can ’traffic’ electrons. One particular phenazine that 2,3-butanediol stimulates P. aeruginosa to produce in excess is pyocyanin. This is used by E. aerogenes to increase its efficiency of metabolism of its sugar substrate from relatively inefficient fermentation to respiration, which generates electrons that can be fed into the electrode of the reactor.

The team found that when the two organisms are together, they produce 14 times more electric current than when on their own. Feeding a monoculture of P. aeruginosa with 2,3-butanediol results in a doubling of electric current, while exposing E. aerogenes to pyocyanin causes its current production to rise almost 20-fold. The study is the first to demonstrate metabolite based ’inter-species communication’ in bioelectrochemical systems, resulting in enhanced electrochemical activity, says Angenent, adding: ’It also explains how an inconsequential fermenter can become an important electrode-respiring bacterium within an ecological network at the anode.’

Korneel Rabaey, who works at the Advanced Water Management Centre at the University of Queensland in Australia, says: ’As microbial populations will be essential for stable current generation, particularly when waste feedstocks are used as a fuel, understanding what drives high current output and stable community performance is an essential part in the development of this technology.’