Certain cholesterol-reducing drugs appear to damage mitochondria, the tiny power stations inside living cells. That’s just one of several startling results uncovered by a survey that tested the biochemical effects of nearly 2500 drugs and natural products on muscle cells to assess how their mitochondria reacted to the chemicals.

The survey also found that a natural product found in green tea exerted a direct biochemical effect on mitochondria that might account for the ancient Chinese remedy’s apparent health-giving benefits.

The experiments aimed to shed light on how diseases are affected by the performance of mitochondria, which take in glucose as a fuel to manufacture adenosine triphosphate (ATP), the principal energy currency of the cell. Over the past few years, malfunctioning mitochondria have been implicated in a range of diseases. 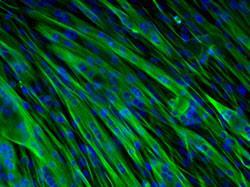 So Vamsi Mootha of the Harvard Medical School in Boston, US, and colleagues developed a series of assays to measure various aspects of mitochondrial function - such as the rate of production of ATP and the expression of specific genes. The key to the project was to be able to carry out a large number of these assays rapidly.

The team used plates containing hundreds of small chambers in which they cultured muscle cells that contain mitochondria, then used automation and robotics to challenge the cells with almost 2500 compounds, before running their tests.

When the researchers tested various statins, which are widely prescribed for lowering cholesterol levels in the blood by inhibiting a key enzyme involved in cholesterol synthesis, they found that three of them - fluvastatin, lovastatin and simvastatin - were toxic towards mitochondria. ’Patients have reported muscle aches and cramps as a side effect of some statins and this could be one reason,’ Mootha told Chemistry World. ’This clinical hypothesis could have huge implications worldwide.’

"The methods presented by these authors and the results obtained to date need to be urgently examined by pharmaceutical companies and drug licensing agencies " - Timothy Gant, MRC Toxicology Unit, Leicester

Another compound, deoxysappanone, which is found in green tea, was shown to improve the efficiency of mitochondria.

Mootha said that the assay system could be used to test the effect of almost any compound on mitochondria. ’We would like the entire biomedical community to start using this platform,’ he added.

Commenting on the work, Timothy Gant of the Medical Research Council’s Toxicology Unit at the University of Leicester in the UK, told Chemistry World that the new data were ’both illuminating and provocative.’

’The methods presented by these authors and the results obtained to date need to be urgently examined by pharmaceutical companies and drug licensing agencies,’ he said, adding that further work should be commissioned to explore the discoveries, and their application in drug development.