Arctic biting back over mercury pollution

In the Arctic, there are high concentrations of mercury in humans and animals and scientists are investigating how the mercury got there. Mercury has a tendency to accumulate in organisms and bio-magnify (increase in concentration) up through the food chain,  so monitoring its levels in the environment is important.  In previous investigations, polar bear organs, such as the liver, kidney, hair and blood have been analysed for mercury content, but the results can be inaccurate because soft tissues change throughout the lifetime of the animal. 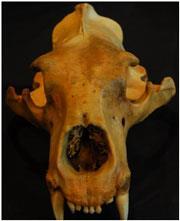 Polar bear teeth from the Natural History Museum at the University of Oslo, Norway, were used as biotracers of temporal changes in mercury pollution exposure

Now, Aurore Aubail from the National Environmental Research Institute, Denmark, and colleagues from France and Norway, have investigated the temporal trends of mercury using polar bear teeth. Teeth are seen as better materials to use, as contrary to soft tissues, the tooth is not remodelled throughout its life and the mercury is not remobilised.

’Lots of teeth of various Arctic species are stored in natural history museums of Nordic countries and these institutions are a mine of environmental pollution archives,’ says Aubail. ’Their collections often go back 100-200 years, which allow researchers to establish time trends of pollutants. Working with these polar bear skulls was really exciting, but extracting the teeth was quite a hard task. It even involved a toolbox!’

The team collected teeth samples from 87 polar bear skulls from the Natural History Museum at the University of Oslo, Norway. They analysed mercury concentrations by solid sample atomic absorption spectrophotometry and the relative abundance of carbon (13C/12C) and nitrogen (15N/14N) stable isotopes by an isotope-ratio mass spectrometer to provide information about potential changes in feeding habits or habitats for polar bears.

The results showed that there has been an overall decrease in mercury concentrations in the Arctic over the last 50 years, which supports earlier results found in polar bear hair from Greenland and human deciduous teeth from Norway. The results from the stable isotope ratios eliminated variations in the feeding or foraging habits as a potential explanation. As the mercury emissions are not sourced from the Arctic, another possible cause is a decrease in the source of the mercury emissions from Europe and North America.

’Polar bears are an especially useful species for the biomonitoring of contaminants,’ says Sara Moses, an environmental biologist from the Great Lakes Indian Fish and Wildlife Commission, US. ’Because they are long-lived and sit atop the Arctic food web, they are particularly susceptible to accumulating high levels of mercury in their tissues. As a result, mercury levels in polar bears integrate exposure throughout the food web and provide important information about lower trophic levels as well.’ She adds that teeth are useful monitoring tools because bone is more readily available than soft tissues in many archives and provides a matrix that is relatively stable over time.

Aubail hopes that further investigation into the use of polar bear teeth to study mercury will continue as it is ’still a valuable material that allows us to study long term trends of pollutants’.