Artificial hips lubricate themselves by grinding up proteins, but are graphite fragments something we want in our bodies?

Metal-on metal hip replacements are lubricated by a layer of graphite, say scientists in the US. And this graphitic layer may be the product of proteins ground up the implant itself. This knowledge could help the design of new implants but also raises important questions about the action of the graphite in the body.

Over 50,000 hip replacements are performed each year in the UK and in the US that number is over 200,000. But although surgeons are moving towards low wearing metal-on-metal joints, no one is precisely sure why the two metal pieces slide so well. Although it is known there is a layer that affects the friction, lubrication and wear of the two surfaces, known as a tribological layer, until now no-one has examined its composition. 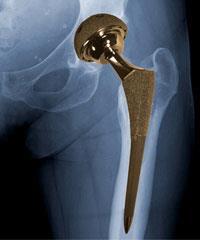 Laurence Marks, a materials scientist at Northwestern University, Illinois, says that after meeting Alfons Fischer from the University of Duisburg-Essen, Germany, the two started working on the problem. ’It’s the most enjoyable topic I’ve ever worked on,’ says Marks, whose work on nanoscale materials does not normally coincide with the medical world.

The metal hip replacements are made from a cobalt-chromium-molybdenum alloy with around 60% Co, 26% Cr and 5-7% Mo and, until now, it’s been assumed that the layer between the moving parts is protein-based, made of denatured proteins from the synovial fluid found between joints in the body. What Marks found was something quite different - graphite, the allotrope of carbon that is used as a dry lubricant in machinery and engines.

Marks took samples from removed implants and analysed the layer using electron energy loss spectroscopy (EELS). ’You shine electrons onto a sample and see how much energy they lose and you can determine what the chemical state is,’ Marks explains, who says these spectra were the key finding that proved the layer was graphitic.

So how did the graphite get there? Marks and colleagues suspect that albumin from the synovial fluid is reduced to carbon by the metal and then the sliding between the joints converts the carbon to graphite. ’That’s what happens in the lab,’ he says. However, Douglas Hansen of the University of Dayton Research Institute does wonder where the nitrogen has gone. ’If the layer is a result of serum proteins adsorbing on to the metal surface of the Co-Cr-Mo femoral head (or acetabular cup if it’s a metal-on-metal implant) there should be a nitrogen signal,’ he says.

But the discovery of graphite between implants’ parts suggests that to improve the lubrication and protection of hip replacements, the implant can be modified to promote the growth of this graphitic layer - for example Marks suggests that they could make the implant from a single crystal.

But the other point is that there could be graphite nanoparticles flaking off inside the body. ’Nobody would look for graphite in the body,’ says Marks. ’You won’t look if you don’t know it’s there.’ And that’s something that needs to be investigated. ’This paper changes the way you think about what’s going on.’