Scientists in Korea have created an artificial virus that can target the nucleus of cancer cells and knock out specific genes. The work opens up the possibility of a new type of ’vector’ for carrying genetic material into diseased cells - the basis of gene therapy.

Usually modified natural viruses are used in gene therapy experiments, as they are the supreme infiltrators of cells. However, these have had only sporadic success - the body’s immune system can react against them and there is evidence that the viruses can themselves cause cancer. Efforts to develop artificial viruses - essentially proteins that can smuggle genes into cells without being detected - have been unsuccessful because producing viruses of consistent size and shape has proved difficult. 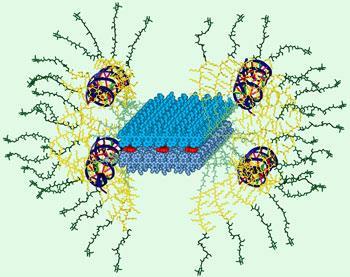 The two-layered peptide ’virus’ holds a hydrophobic payload between the layers, and has coiled RNA molecules strapped to the sides

Myongsoo Lee and colleagues at Yonsei University in Seoul set about making a robust peptide scaffold capable of carrying genetic material into a cell. Lee’s team assembled thin sheets of peptides consisting of alternating hydrophobic - water-repelling - and charged amino acids. These sheets self-assembled into long, thin, two-layered sandwich structures. The researchers engineered key features into their scaffold: cationic segments capable of binding nucleic acids, and carbohydrate portions that could dock onto receptors on a cell’s surface to allow entry of the particle into the cell.

’The most important structural feature of the virus is that its shape is rod-like,’ says Lee. It is easier to control the size and shape of a filamentous virus, which also persist longer in living cells.

The researchers then lashed molecules of RNA onto the virus surface at the cationic binding sites. These short lengths of RNA were chosen specifically to ’silence’ genes in a host cell through a process called RNA interference. They presented the RNA-laden virus to cancer cells in a test tube. The virus was taken up and the target genes subsequently silenced. In a second experiment the researchers placed a hydrophobic dye molecule - as a substitute for a drug molecule - in the cavity between the two layers of the virus. This too was taken into the nucleus of the cell, demonstrating the ability of the system to deliver drugs to the nucleus.

Commenting on the work, Peter Searle, based at Cancer Research UK’s Institute for Cancer Studies at the University of Birmingham, says, ’This research shows that peptides can assemble into neat ribbon-like structures and bind small nucleic acid molecules. Importantly, the peptides structures can deliver these small molecules into cells. It will be interesting to find out if the ribbons can also bind to larger pieces of DNA - such as whole genes or the genomes of viruses that could kill cancer cells - and deliver these to the intended target cells in the body.’