A type of water-containing asteroid is up to 9 million years younger than previously thought and formed later than other asteroids in the solar system, say scientists in Japan. They accurately calculated their age using a new technique to date carbonates in meteorites derived from hydrous asteroids. The results agree with a model of asteroid formation that involves heating by a radioactive nuclide. 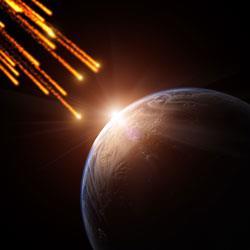 The formation of asteroids and other small bodies in the solar system by accretion is a fundamental process that preceded planet formation but remains ’one of the most poorly understood processes in the planet formation theory’, says Wataru Fujiya, lead researcher at the University of Tokyo. Studies on different classes of meteorite have suggested that when asteroids are formed helps to determine the temperatures that they experience, as it governs the abundance of the hot radionuclide aluminium-26. But the data that maps out the story of the formation of hydrous asteroids, which contain water and organic matter, have sparked controversy.

Hydrous asteroids are relatively distant from the Sun and studies of their chondrite-type meteorites have revealed that these asteroids underwent water-induced alteration at low temperatures that are consistent with relatively late accretion. However, this is not consistent with current data on the age of the meteorites, which points to much earlier accretion dates that are closer to those of the oldest solids in the solar system, the calcium-aluminium-rich inclusions (CAIs).

According to Fujiya, the discrepancy originates from the absence of a suitable carbonate standard with which to measure the age of these minerals in meteorites using the ratio of manganese-55 to chromium-52. The current standard is the mineral olivine but dating using it tends to be out by about 2.2 million years. Using their novel matrix-matched standard based on calcite, a type of carbonate, dating accuracy was improved substantially to within 500,000 years.

The team dated carbonates from four different meteorites blasted from hydrous asteroids and found that they were all around 4,560 million years old, making them up to 9 million years younger than previously thought. This implies that the asteroids coalesced later than thought and that aqueous alteration of the asteroid took place later in the life of the asteroid. The results are consistent with a model of temperature conditions within these asteroids, where aluminium-26 is the heat source.

’These measurements related to carbonates are certainly important, because carbonate minerals contain clues to the water chemistry of the solar system in its first few million years,’ says Erik Asphaug, a planetary scientist from the University of California, Santa Cruz, US. However, he is not convinced by the explanation.

’What makes their measurements particularly intriguing is that asteroid-sized bodies are thought to have run out of steam by around this time, 4 million years post-CAI, so what is the source of late heating? According to them, the only way out is late accretion. I think it’s premature to come to that conclusion.’