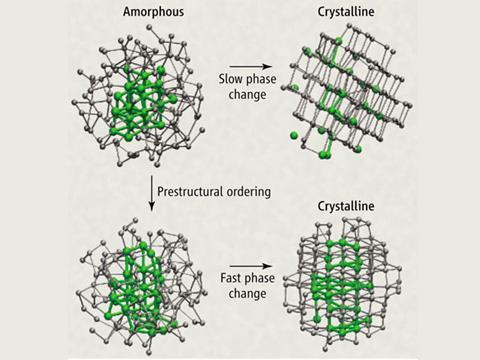 The prospect of a new generation of electronic computer memory devices based on metallic alloys that can switch between crystalline and amorphous phases has moved a step closer with two new pieces of research. A group of scientists in the US has shown that the widely accepted mechanism by which the crystalline lattice breaks down into the glassy phase in response to an electrical pulse may not be correct – which could open up new avenues of investigation to find more efficient materials.1 Meanwhile, researchers in Singapore and the UK have found a way to significantly increase the switching speeds between the two phases – critical to making faster memory devices.2

Alloys based on germanium, antimony and tellurium (GST) can change phase between crystalline and amorphous states in response to laser or electrical energy and have been used in optical storage discs, such as DVDs, for many years. There have been intensive moves in recent years to use these materials for computer memory devices, exploiting the fact that the phase change is reversible: when an electrical pulse is applied to the crystalline material the lattice collapses into an amorphous glass; a longer, less intense pulse can restore the lattice, making the material rewritable. It is believed that such phase-change memory (PCM) devices could be faster, smaller and more efficient than the present generation of memory chips.

The precise mechanism of the lattice collapse – a process called amorphisation – in response to an electrical pulse is not fully understood. Now, a team led by Ritesh Agarwal at the University of Pennsylvania has directly observed the process under an electron microscope and has shown that previously held assumptions may not be true. ‘The general assumption has been that when you apply a short burst of electrical energy this melts the lattice, which solidifies to a glass,’ Agarwal says. ‘A second, less intense and longer pulse allows the atoms to find their lattice positions and the crystals re-form.’

Agarwal’s observation of the breakdown of the crystal structure was different, however. When an electrical pulse was first applied, dislocations appear –  where planes of atoms shift in relation to their neighbours. As the pulses continue and increase in intensity, the momentum of the incoming electrons from the current push the dislocations in the direction of the current. ‘Then at some point they become locked in position – it is like a traffic jam on the highway and the structure breaks down,’ says Agarwal. ‘Our work suggests that you do not have to think about melting the material – rather you need something that dislocates easily, so efforts can be channelled in this direction.’

Konstantin Borisenko, who studies phase change materials with electron microscopy at the University of Oxford, UK, says that while the new work does not fully solve the problem of understanding the mechanism of phase transition in PCM material yet, it does ‘highlight important properties of such transitions under electric current which will help to solve the mechanism and will possibly help to develop novel PCM-based electronic memories/devices'.

Meanwhile, a team led by Luping Shi of the Data Storage Institute in Singapore and Stephen Elliot of the University of Cambridge, UK, have shown how the switching speeds of GST memory devices can be significantly speeded up. Crystallisation of GST from its amorphous phase is much slower than amorphisation, which can limit the potential speed of devices. The  researchers discovered that if the PCM cell is first primed, or ‘incubated’, with a weak electric current, the speed of crystallisation is increased by around an order of magnitude by providing a degree of ‘prestructural ordering’ of the amorphous phase, in readiness for its transition.

Commenting on the finding, David Wright of the University of Exeter, UK, says: ‘Such a fast switching means that phase-change memories can compete with conventional silicon-based dynamic random access memories, at least on speed and scaling terms, opening up a potential new application route for phase-change technology.’