Bounty of the Indian neem tree replicated in the lab

A complex natural product has finally succumbed to its first total synthesis after 22 years of attempts by eminent organic chemists.

’I would rank this as being one of the very toughest syntheses so far reported,’ said a jubilant Steven Ley, of the University of Cambridge, UK, who led the team which discovered how to create azadirachtin from scratch.1

Azadirachtin is an environmentally friendly insecticide. Though biodegradable and not very toxic to humans, it disrupts the growth cycles of insects and deters them from feeding on plants. It was first extracted from the Indian neem tree in 1968, but its structure was not correctly determined until 1985.

For the next two decades, the molecule’s synthesis has frustrated over 40 organic synthetic chemists in Ley’s laboratory alone, and numerous other teams. As Ley explained, azadirachtin’s structure is immensely complex, with 16 adjacent chiral centres, and a central bond congested by neighbouring atoms. ’We call it a who’s who of oxygen atoms as it contains almost every type of oxygen functionality,’ he said. Azadirachtin is also sensitive to acid, base, and unstable in light: its tendency to rearrange has scuppered many attempted syntheses. 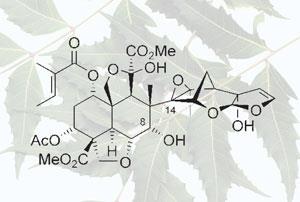 Azadirachtin, and the Indian neem tree

The complete synthesis led to the invention of many new methods and concepts, said Ley. ’It’s by far the hardest molecule we’ve ever worked on,’ he said. ’The construction of this formidable molecule by the Ley group is a magnificent achievement in the field of chemical synthesis,’ commented K C Nicolaou, of the Scripps Research Institute and University of California, San Diego, who has also worked on azadirachtin.

"I would rank this as being one of the very toughest syntheses so far reported." - Steven Ley, University of Cambridge, UK

For all practical purposes azadirachtin would be extracted from a tree, not made expensively from scratch. But the natural product’s synthesis is more than just a demonstration of the power of organic chemistry, Ley pointed out. The 22-year journey was more important than its conclusion; by working on the problem, chemists have generated a wealth of information on the biological properties and reactivity of azadirachtin, which may aid the search for other plant-derived insecticides.

The molecule has also provided a ’stunning training ground’ for generations of chemists who have moved into drug discovery, Ley added: ’The people who can do this work are the best in the world.’ 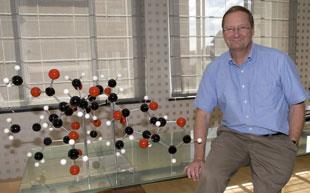 ’We’ve had a lot of champagne this year,’ said Ley, reflecting on his group’s recent successes, including the end of a 17-year struggle to synthesise rapacmycin, published in December 2006.2 ’But there’s nothing like azadirachtin for a sense of achievement.’