Japanese researchers have used motile bacteria to rotate a microscopic motor made from silicon. The team believes that their system - fuelled by glucose - is the first micromechanical device to integrate inorganic materials with living bacteria.

Yuichi Hiratsuka and colleagues at the National Institute of Advanced Industrial Science and Technology, Tsukuba, cut a circular channel 2?m wide with a radius of 6.5?m into a silicon base. They made a tiny cog-shaped silicon rotor that lay flat over the circular track with vertical protrusions from the rotor that dropped snugly into the track, allowing the cog to rotate freely in a horizontal plane. 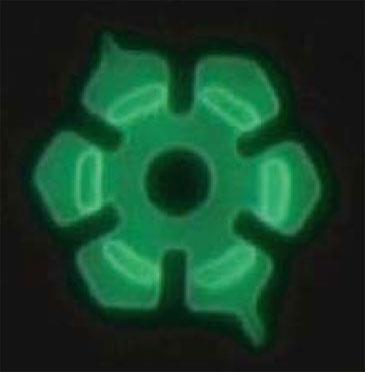 Fluorescent microscopic image of a hexagon-based rotor driven by bacteria

Motile Mycoplasma bacteria were fed into the channel. Specific topological features that had been designed into the channel, and various chemicals attached to its surface, ensured that the bacteria generally moved in one direction only. An adhesive protein was attached to the protrusions from the rotor. When the bacteria, whose mechanism of motility is not well understood, encountered the adhesive they became tethered to the rotor. The bacteria pushed the rotor at about two revolutions per minute as they moved through the channel.

’While it was theoretically predictable that a microrotary motor could be driven by bacteria, we were absolutely excited when we first saw it rotate,’ Hiratsuka, who is currently based at the University of Tokyo, told Chemistry World. ’Because its rotation was smoother than we imagined it did not look like a device being driven by living materials.’

The researchers suggest that using whole cells in this way can avoid some of the complications that arise when other biological systems are used to drive micro- or nanomechanical devices - such as isolated proteins - and that genetic engineering of the microbes offers a way of improving the efficiency of such devices.

’This is certainly a new and clever approach to using bacteria as catalysts for the conversion of chemical energy to electro/mechanical power,’ said Timothy Gardner, a microbe expert at Boston University department of biomedical engineering, Massachusetts, US. ’There’s been a lot of recent interest in microbial fuel cells that directly convert chemical to electrical energy, and of course bioconversion of complex organic materials into familiar fuels such as ethanol, butanol and gasoline. I would imagine and hope that this work will help bolster the growing interest in creative ways to blend biology, nanotechnology, and electronics,’ Gardner told Chemistry World.

But there is a possible drawback, warned Ravi Saraf of the University of Nebraska, Lincoln, US. Bacteria-driven micromotors might suffer energy losses due to internal friction of the moving parts, said Saraf. Nevertheless, he said, ’I see some exciting applications in active transport of material for micro/nano fluidic devices. For example if the bacterium’s motion can be controlled one could develop pumps, valves, ratchets and so forth to transport fluid.’