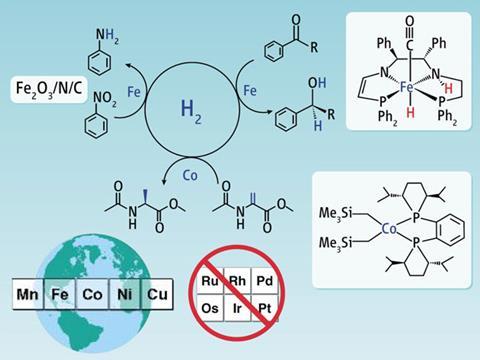 Three teams have shown that chemists need not rely only on expensive and toxic precious metal catalysts for hydrogenation, by each independently revealing complementary alternatives based on cheap, abundant and safer transition metals. Their high purity chiral products and selective reactivity hold most immediate promise in synthesising valuable compounds, such as pharmaceuticals, but could also benefit green chemistry. ‘We need cheap catalysts in processes that can help clean up the environment or provide clean energy, like fuel cells,’ says Robert Morris from the University of Toronto, Canada.  ‘So we really have to use the abundant elements instead of rare ones.’

Hydrogenation is commonly used to reduce or saturate molecules and, to date, has relied on expensive catalysts based on metals like platinum or rhodium. Morris’ team has improved iron complexes for solution-phase asymmetric hydrogenations that rapidly and cleanly make chiral alcohols and amines from ketones and imines.1 In previous studies, they coupled iron with a chiral bis(imine)diphosphine ligand, but could see this was being converted to a different compound that was the active catalyst. Now they have shown that isopropanol, their solvent and hydrogen source, was reducing one of their ligand’s imines. And by producing that molecule directly they gained a 30-fold boost in catalytic activity, meaning that some reactions are complete in just seconds at room temperature and pressure. ‘We have made iron compounds that are much more active than non-sustainable platinum and ruthenium complexes – and ruthenium is 10,000 times more expensive,’ Morris stresses.

Paul Chirik’s group at Princeton University, US, and scientists at Merck in nearby Rahway, US, have also developed solution phase asymmetric hydrogenation catalysts, but based on cobalt.2 Merck’s process chemists previously found rhodium catalysts for manufacturing their blockbuster chiral diabetes drug Januvia (sitagliptin) through high-throughput catalyst screening. This inspired Chirik to consider a similar approach for base metal catalysts for alkene hydrogenations, and eventually resulted in him working with Merck. ‘If you’re serious about doing this with cobalt or iron, you’ve got to screen ligands rapidly,’ he explains.

‘There are cobalt compounds that everyone has on their shelves, like cobalt chloride hexahydrate,’ Chirik says. ‘Add the right activator and you can turn them on to do hydrogenations of functionalised or unfunctionalised olefins from one platform. There’s no single precious metal platform that will do that.’

German chemists also report iron oxide-based nanoparticle catalysts containing iron–nitrogen complexes that can selectively reduce nitroarenes to anilines.3 The team, led by Matthias Beller at the Leibniz Institute for Catalysis, describe a heterogeneous technique needing 5MPa of hydrogen and 120°C temperatures. But even in these comparatively harsh conditions, they reduce aromatic nitro groups in high yield, while leaving other susceptible groups, such as ketones, amides and nitriles, unaffected.

Morris Bullock, who develops transition metal electrocatalysts at the Pacific Northwest National Laboratory, US, but was not involved in these studies, highlights advantages beyond cost. ‘If you are making pharmaceutical products then regulatory agencies allow a larger residual amount of iron compared to platinum or rhodium,’ he tells Chemistry World. Bullock, who wrote a perspective on these three papers4, adds that catalysts based on inexpensive metals could enable more practical vehicle fuel cells than precious metals. ‘The concepts are equally applicable to energy-related catalytic reactions. The need to examine the reactivity that can be obtained from abundant metals is pervasive through all catalytic applications.’

Meanwhile, Chirik feels that these catalysts’ simultaneous appearance is no coincidence, as they are building on progress in basic synthetic chemistry. ‘Why are these great catalysts based on ruthenium, rhodium and iridium when they’re some of the most exotic metals on the periodic table?’ he asks. ‘Because there were good precursors. People are now starting to have that for other metals – we’re giving people ways to get to catalysts.’