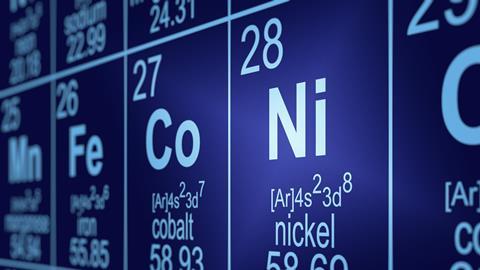 The limited availability and expense of precious metal catalysts such as platinum and iridium challenges the sustainability of synthetic chemistry. Earth-abundant, first-row transition metals can often theoretically replace them, but only in low oxidation states. ‘Second- or third-row transition metals are quite happy being isolated metal(0) complexes,’ says organic chemist Stephen Thomas at the University of Edinburgh. ‘Iron(0) wants to be rust, or a nanoparticle, or something else that’s not active.’ This often makes agents containing these species highly unstable in air and water, and therefore impractical in industry. Alternative reaction schemes have been developed to generate these complexes in situ, but they usually involve equally unstable organometallic reducing agents. 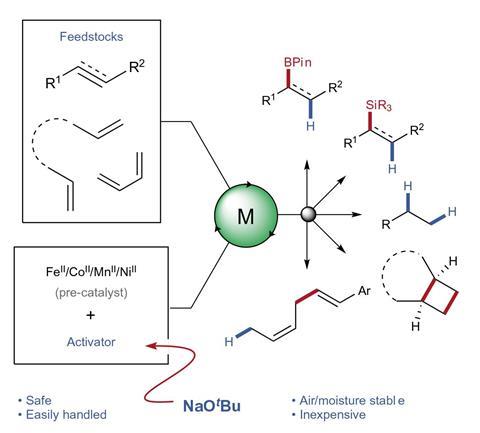 Thomas and colleagues focus on more practical, sustainable approaches for earth-abundant catalysis. ‘Aiming to do something very similar using a different reagent, we discovered a difference in reactivity depending on how we made that separate reagent,’ Thomas explains. ‘From there we got to alkoxides as a general activator.’

They worked out that if sodium tert-butoxide is added to the reaction mixture it is insufficiently reducing to activate the catalyst alone, but it will react with a variety of other reagents such as boronic esters and silanes to form a hypervalent complex that acts as a hydride donor and reduces the pre-catalyst to the required oxidation state. The researchers successfully activated previously demonstrated iron and cobalt pre-catalysts for a variety of reactions, including commercially important reactions such as alkene hydrosilylation, which produces silicone-based surfactants and currently consumes around 5.6 tonnes of platinum per year. They also demonstrated reactions using nickel and manganese complexes that had never been reported before. ‘I think that’s what’s really exciting,’ says Thomas. ‘The barrier to discovery is much lower now.’

Cathleen Crudden of Queen’s University in Ontario, Canada is impressed. ‘There’s been a lot of very nice work done in main group late metal catalysis, and I think it’s important for the field to move to systems that are easy to handle,’ she says. She is particularly impressed that, towards the end of the paper, the researchers move beyond basic reactions such as hydrogenation and hydrosilylation and look at basic carbon–carbon bond-forming reactions such as hydrovinylation. ‘Making carbon–carbon bonds is always more complex and, I think, very important for making molecules of higher complexity,’ she says.