Fresh calls for the extradition of former Union Carbide chief executive Warren Anderson to India from the US have brought the Bhopal industrial disaster of 1984 back to the front page.

Union Carbide’s Bhopal pesticide plant spewed 40 tonnes of deadly methyl isocyanate gas on the night of 2 December 1984 in what came to be known as the Hiroshima of chemical industry.  The accident killed at least 10 000 and reportedly left more than 500 000 survivors with medical problems.

Despite being in his 80s, Anderson is the most wanted person by survivors of the tragedy: ’They will not rest until he is brought to justice,’ Rachna Dhingra of the Bhopal Group for Information and Action told Chemistry World.

Dhingra, one of several activists fighting for the cause of the survivors, was reacting to renewed efforts to push authorities to force Anderson to face trial in India. In 1992 an Indian Court charged Anderson with manslaughter following the incident at the Bhopal pesticide plant, a charge that carries a maximum penalty of 10 years in prison. Despite several summonses, Anderson has refused to appear in court. 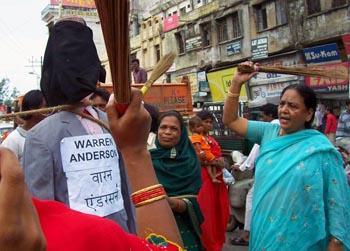 On 31 July a Bhopal court in issued a fresh warrant for Anderson’s arrest and ordered the Central Bureau of Investigation (CBI) - equivalent to the FBI in the US - to produce him without further delay. The court has also asked the Ministry of External Affairs to press Washington again for Anderson’s extradition. ’India’s earlier extradition request in May 2002 was rejected in 2004 by the US justice department for "technical" reasons and the CBI did nothing after that,’ Dhingra says. ’Thanks to the latest ruling we expect CBI to act.’ She said the court will pursue the issue at the next hearing on 19 August. As of 4 August the Indian government has not submitted the extradition request to Washington.

But what do the survivors hope to achieve by putting 89-year-old Anderson on trial? ’It is just a question of punishing the guilty,’ says Pushpa Bhargava, chairman of the Sambhavna Trust that supports Bhopal victims. But Union Carbide maintains that the accident was due to employee sabotage and not the result of faulty equipment. In 1989 it paid $470 million (?276 million, at today’s rates) in compensation that worked out at just $600 per affected person, says Bhargava.

With the 25th anniversary of the tragedy nearing, local people remain concerned that chemicals still lingering at the toxic site and in contaminated water could continue to cause death and ill health. Dhingra says the clean up will cost $300 million, a figure she feels is ’absolutely not difficult for the US company to bear.’But Midland, Michigan-based Dow Chemical, the owner of Union Carbide since 2001, says it is neither liable for the accident nor will it pay for cleanup as it came to the scene several years after the incident. Dhingra says the survivors - who vented their anger on the effigy of Anderson after the court ruling last week - will keep fighting until the government sets up a national commission to settle all outstanding issues.