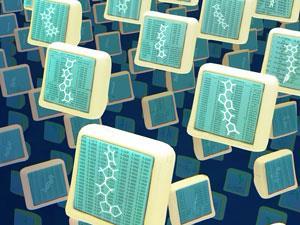 After 150 million theoretical calculations, scientists at Harvard University in the US reveal results that could cut down the time and cost of experimental tests to find better organic electronic materials for solar cells.

The Harvard Clean Energy Project (CEP) team led by Alán Aspuru-Guzik is using the predictive power of computers to speed up this process. Analogous to the modern drug discovery process, where large numbers of molecules can be virtually screened taking only the most biologically active ones forward into development and trials, Aspuru-Guzik’s group screened 2.3 million molecular structures to find ones that had the best properties for solar cells.

A single computer would have taken thousands of years to calculate this. Instead, the group harnessed the power of the World Community Grid, a supercomputing platform founded by IBM, which harvests power from thousands of volunteers’ personal computers.

26 basic molecular building blocks were chosen with advice from experimental groups on synthetic feasibility. These were fused in every possible combination up to lengths of five units to generate and characterise 2.3 million compounds. The group then used a theoretical model called the Scharber Model to assess the electronic properties of the compounds and give an indication of their potential.

Aspuru-Guzik and co-worker Johannes Hachmann say the top candidates that emerged included structures that had attracted speculation but had not previously been investigated, such as silicon heterocycles, as well as, reassuringly, molecules already known to perform well by experimentalists. The best candidates were analysed further to identify trends in the building blocks and design rules that make up efficient materials. The 400 tetrabytes of data generated is stored in the Clean Energy Project Database, which is freely available to the public.

‘The results outshine the incremental progress that could have been made by manually considering a handful of test molecules’ says Markus Reiher, an expert in the theoretical chemistry of electronic structures at ETH Zurich in Switzerland. ‘The data collected are a treasure chest for analysing chemical properties on a huge set of reference molecules’.

Anatole von Lilienfeld, who specialises in compound design using quantum mechanics at the University of Basel in Switzerland, was also impressed by the study. ‘This approach might well represent the crucial stepping stone on the way to providing society with abundant yet power-efficient molecular electronics’.