The UK has seen a jump in battery recycling - but could advances in portable power technology eventually make it a thing of the past?

Recycling has now become part of our everyday lives, with almost all households in the UK required to separate paper, plastic and glass for collection. However, one class of household product was for many years neglected: batteries. Things are now beginning to change thanks to legislation introduced last year, and rates of battery recycling have increased markedly in recent months. But battery technology is advancing rapidly and one school of thought suggests that in the future battery recycling may be rendered virtually obsolete.

Around 45,000 tonnes of portable batteries are consumed each year in the UK. Before new legislation was introduced at the beginning of 2010, only around 3 per cent of such consumer batteries were recycled. Following the new Battery Regulations, introduced in response to an EU directive, targets of 25 per cent by 2012 and 45 per cent by 2016 were announced.

Battery retailers selling more than 32kg of portable batteries a year - the equivalent of one AA four-pack a day - are now required to provide free collection facilities. This drive resulted in a total of 16 per cent of portable batteries being recycled in the second quarter of 2010, compared with just over 9 per cent in the first quarter. 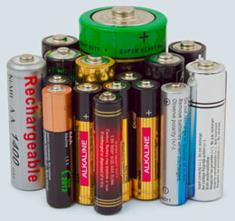 Battery recycling is on the up

But the UK has a considerable way to go before it matches many of its European neighbours. In 2002, for example, Sweden was already recycling more than half its batteries, while the figure for Belgium was closer to 60 per cent.

One of the main reasons for the recycling drive was to reduce the amount of toxic material ending up in landfill or incinerators. A single 25g nickel-cadmium battery, for example, can contaminate 750,000 litres of groundwater to the maximum permissible concentration limit.

But advancing technology is reducing the problem. Fiona Gray is a senior teaching fellow at the University of St Andrews in the UK. An electrochemist by training with research experience in polymer batteries, Gray has investigated the battery recycling issue. ’Nickel-cadmium are the big secondary [rechargeable] batteries, but these are being superseded by nickel-metal hydride, which cuts out the cadmium,’ she says. ’Mercury has pretty well disappeared from batteries, although it is possible that some of the cheaper imports might contain unacceptable limits.’

But the real bonus lies in the development of new lithium polymer batteries. Here the lithium salt electrolyte is held in a solid polymer composite such as polyethylene oxide and packaged in a flexible plasticised pouch rather than a steel casing. This allows the battery to be formed into a wide range of shapes, especially suitable for compact devices such as mobile phones and hand held computers. ’In effect, there is nothing worth recycling in these batteries,’ suggests Gray.

Another potentially important source of portable power that is making significant technological strides is the fuel cell, where energy contained in a chemical fuel such as hydrogen or alcohol is converted to electricity.

US-based energy consultancy Pike Research suggests that the global market for portable fuel cells could be worth more than $2 billion (?1.2 billion) by 2016. ’Dozens of niche applications will drive the growth of the fuel cell market over the next several years,’ says managing director Clint Wheelock. ’Manufacturers are increasingly finding that fuel cell technologies are an attractive alternative to batteries and small generators for portable power applications.’

Ulrike Krewer works on portable energy systems at the Max Planck Institute at Magdeburg in Germany. ’I think that fuel cells have the potential to become an alternative to some batteries, but will probably complement batteries rather than replace them,’ she says.

Krewer predicts that portable energy in the future will consist of three main elements: highly efficient, energy dense batteries, ’energy harvesting’ systems that take energy from the environment from sources such as sunlight, and fuel cells.

’Portable devices are using less and less energy, and energy is being supplied by higher density sources, which is providing much more flexibility than before,’ says Krewer.

So while battery recycling is likely be with us for some years to come, the future of portable energy is changing fast and recycling schemes in the coming decades may look very different to those we have today.