French scientists have demonstrated the potential of a new fuel cell catalyst inspired by hydrogenase enzymes. Although its activity doesn’t yet match that of platinum, the researchers say it is the first useful biomimetic catalyst capable of operating under fuel cell conditions.

In a hydrogen economy, power would be generated by oxidising stored hydrogen in fuel cells. This reversible reaction - the opposite of which produces hydrogen through the electrolysis of water - can be driven by platinum-based catalysts. Nature, however, in hydrogenase enzymes, has evolved a way of doing this without the need for such rare metals and thus borrowing from nature’s design may be a way to create fuel cell catalysts on the cheap.

Vincent Artero at Joseph Fourier University and colleagues have achieved a significant step towards this goal with a nickel bisdiphosphine-based design. Artero explains that it is the first time this has been shown for such a sophisticated bio-inspired compound. ’Most people think these compounds are nice achievements of academic research, but that they will never be stable under technological conditions - under pressure, under heat and in very acidic solutions,’ he says. ’We have demonstrated that we can use these compounds under the conditions that are used in the fuel cells, or electrolysers, that are developed at the moment.’ 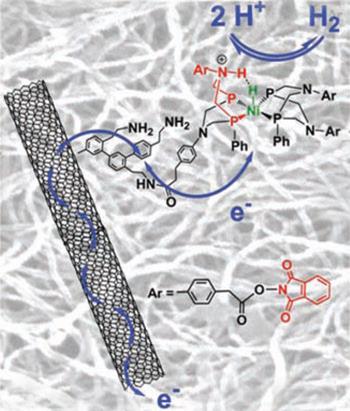 A close look at the catalyst reveals a striking similarity to the metalloproteins on which it is modelled. At the centre is a nickel atom, as in nickel-iron hydrogenases, combined with a diphosphine ligand bearing a basic N-H that mimics a co-factor in iron-iron hydrogenases and helps to control proton movement as hydrogen is either produced or oxidised. Artero’s team grafted their complexes onto electrically conducting carbon nanotubes that drive electrons to or from the active site and embedded them in a polymer to protect them from acidic electrolytes - mimicking the protection afforded by polypeptide chains in enzymes. The result is a catalyst that shows impressive efficiency and stability under operating conditions.

Dan DuBois, at the Institute for Interfacial Catalysis in Richland, Washington State, developed the original design on which Artero’s catalyst is built. ’They’ve really shown that you can take these catalysts and put them in an operating cell,’ he says. ’They’re actually functioning quite nicely, and I think that if we can get another one or two orders of magnitude in rate, which is doable, then they will be useful.’

Artero explains that the rate difference may be due to bulky functional groups used to anchor the catalysts to the nanotubes. ’We think that may have slowed the catalytic activity,’ he says. ’So we can now try to imagine another way to graft the catalyst and to keep the catalytic activity high.’ But he also points out that, crucially, the overvoltage - the amount of energy ’wasted’ to drive the reaction at a sufficiently high rate - does approach that of platinum, unlike most other non-Nobel metal designs.