Regenerative medicine could benefit from this hydrogel and conducting polymer combo

Implantable medical devices of the future could be built from a new material that is made by layering bacterial cellulose hydrogels with conducting polymers.

Bacterial cellulose (BC) is a naturally occurring polymer hydrogel that is flexible and known to respond to environmental changes. Guang Yang and co-workers at Huazhong University of Science and Technology in Wuhan, China, added a layer of conductive polymer polyaniline (PAni) onto a BC hydrogel to give a material that responds to electrical signals.

The base cellulose hydrogel is made by Gluconacetobacter xylinum bacteria. After purification, the hydrogel is soaked for 48 hours in a solution of salts and aniline monomers. The gel is then sandwiched between two electrodes, and applying an electrical current causes the monomers to form a polymer film layer. 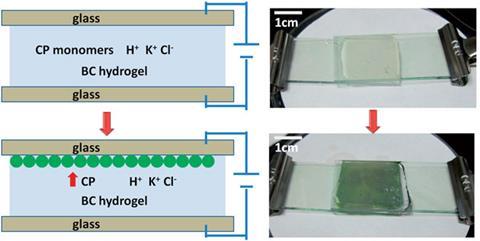 The gel is sandwiched between two electrodes, and applying an electrical current causes the monomers to form a polymer film

The BC–PAni material responds to changes in voltage, undergoing a controlled transition between three oxidation states. This response could be applied in drug delivery systems that are stimulated by electronic signals, where the release of charged biomolecules is driven by changing the redox state of the material. A colour change also occurs in response to different redox potentials, which could form the basis of a sensor to detect the redox environment of the material within an organism.

BC hydrogels are non-toxic. Crucially, cell viability assays showed that the BC–PAni materials were also not toxic to cells incubated on their surface. ‘The most exciting aspect of this work was that we could take useful properties from each material to get good electronic communication and biocompatibility,’ says Yang. This distinguishes these materials from other electroactive hydrogels, which are often toxic.

Maria Vamvakaki, an expert in the biomedical application of polymers at the University of Crete in Greece is also excited by this new approach. ‘The interface of two materials with excellent biological and electroactive properties opens new perspectives for applications in biomedical devices and life science in general.’