Biodegradable electronics dissolve after use

Along with the usual mix of teabags, banana skins and egg shells, compost bins of the future could contain biodegradable electronic circuits, according to researchers in the US. The electronic components could also be made biocompatible, so they could be implanted into the body for a short period of time before being broken down and absorbed without the need for a second operation to remove the implant. Such devices could include electronically activated drug-release systems or temporary biosensors, for example. 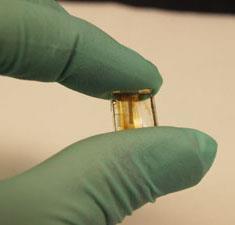 Christopher Bettinger and Zhenan Bao from Stanford University in California, US, set out to fabricate a biodegradable and biocompatible transistor. For two of the device’s components - the substrate and the dielectric - the researchers selected biodegradable polymers that have been approved for medical use by the US regulatory authorities. These were poly(L-lactide-co-glycolide) (PLGA) for the substrate, which makes up more than 99 per cent of the mass of the device, and poly(vinyl alcohol) (PVA) for the dielectric. For the semiconducting molecule the researchers chose 5,5’-bis-(7-dodecyl-9H-fluoren-2-yl)-2,2’-bithiophene (DDFTTF), a robust molecule resistant to harsh conditions and aqueous environments. Gold and silver were used for the electrodes.

’The biodegradation of the small semiconductor in this study has not been explicitly studied,’ Bettinger concedes. ’However, the relatively small molecular weight and the conjugated nature of this molecule suggests that it might be degraded in a similar mechanism as melanin pigments.’ Bettinger says that the amount of silver and gold used is, ’extremely small and less than the concentration of mercury found in large fish that are commonly eaten.’

The transistor was shown to perform sufficiently well to operate simple devices that would be suitable for functions such as biosensing, and continue to work for several hours in the presence of water.

To measure its ability to disintegrate, the device was placed in citrate buffer to mimic a biological environment and its degradation was monitored. For about a month the device remained relatively intact, after which there was a significant loss of mass and uptake of water. After around 50 days, all that remained was a viscous gel composed of PLGA.

Structure of the transistor (left), and degradation of the device at zero days, 30 days and 50 days

In an implanted device, the semiconductor components would probably be encapsulated in a biodegradable sheath, says Bettinger, which would protect the electronics from damage for the amount of time it would take for the encapsulating material itself to degrade.

Martin Goosey, of the Innovative Electronics Manufacturing Research Centre at Loughborough University in the UK, says,  ’This route offers the possibility of biodegradable electronics, thereby avoiding all the common issues with existing electronics.  Plastics from electronic waste is currently a problem.’

’This study represents the first steps in a new direction for organic electronics,’  says Bettinger. ’The organic nature of these systems suggests they will have exciting new applications in the biomedical space, with particular potential applications in medical devices.’