Bioethanol fuel 'as big a health risk as gasoline'

The use of ethanol as a gasoline substitute for motor vehicles may not be the environmental panacea that its proponents would have us believe, according to a US atmospheric scientist.

Bioethanol - ethanol derived from the fermentation of crops such as maize or sugar - is becoming increasingly available as a ’green’ and sustainable alternative to gasoline. It is often sold at the fuel pumps as E85 - an 85:15 mixture of ethanol and gasoline. 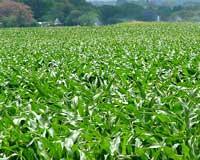 How ’green’ is green?

Now, however, Mark Jacobson of Stanford University is calling into question the environmental credentials of fuels consisting mainly of bioethanol. Jacobson ran computer models of the impacts on atmospheric pollution and human health of vehicles running exclusively on an ethanol mixture and concluded that the number of respiratory-related deaths and illness would increase.

’Our results show that a high blend of ethanol poses an equal or greater risk to public health than gasoline,’ Jacobson said.

’We found that E85 vehicles reduce atmospheric levels of two carcinogens, benzene and butadiene, but increase two others - formaldehyde and acetaldehyde,’ Jacobson said. ’As a result, cancer rates for E85 are likely to be similar to those for gasoline. However, in some parts of the country, E85 significantly increased ozone, a prime ingredient of smog.’ The increased ozone, Jacobson suggested, would result in more asthma-related admissions to hospitals.

’There are alternatives, such as battery-electric, plug-in-hybrid and hydrogen-fuel cell vehicles, whose energy can be derived from wind or solar power,’ Jacobson said. ’It would seem prudent, therefore, to address climate, health and energy with technologies that have known benefits.’

The Ford motor company, which produces ’Flexi-Fuel’ cars that can run on both E85 and gasoline, was unimpressed by Jacobson’s findings.

’The phasing in of E85 is in the interest of developing energy alternatives to petroleum and to encourage the use of renewable fuel to help with CO2 reduction for climate change,’ a spokesman told Chemistry World. ’Local emission regulations, such as hydrocarbons, aldehydes or subsequent ozone, are not the compelling reason to pursue E85.’

In any event, the spokesman said, Ford’s flexible fuel vehicles using E85 ’must comply with the regulated emissions of HC, CO, NOx, formaldehyde, and particulate, as with any vehicle. Air quality regions, such as southern California, must be satisfied that the test results of these vehicles are acceptable for local air quality requirements. Vehicles that do not comply will not be sold.’
He added that the baseline data used by Jacobson, from 2002, ’is not likely to be very representative of 2020 vehicles, particularly in ozone-constrained regions such as southern California where requirements are stringent, so care is needed in interpreting data this far into the future while technology continues to evolve.
’Unburned ethanol and associated acetaldehyde are concerns with E85 due to lower exhaust temperatures, making high catalyst efficiency more difficult, but we also think this issue can be resolved by the time E85 will be prevalent.’