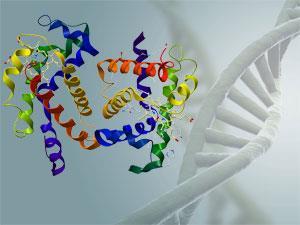 US researchers have discovered a way to significantly improve the sensitivity of DNA-based electrochemical sensors by incorporating an inexpensive, robust and stable protein into the system – haemoglobin.

The stacking of base pairs in DNA results in a large electron cloud along the molecule’s length which is extremely sensitive to any perturbation, such as the binding of a protein molecule. This sensitivity has been harnessed by creating sensors where DNA strands are attached to a gold surface at the bottom end, with a ‘redox reporter’ at the top. A current is passed along the DNA and any disturbance of the electronic field is detected by a redox reporter, which becomes reduced by incoming electrons.

However, once the redox reporter is reduced it is effectively spent, limiting the size of the detectable electronic signal. Strenuous efforts have been made to find ways to regenerate the redox molecule by incorporating a suitable electron sink into the system, to drain electrons away from the reporter, enabling it to function for many more cycles and thereby amplifying the electronic signal.
At the California Institute of Technology, Jacqueline Barton’s team appears to have found an ideal candidate – haemoglobin. ‘Other catalysts, such as ferricyanide, have been used to take electrons away from the reporter,’ says Barton. ‘The problem is that these have also pulled electrons from the electrode surface, leading to false positive readings. To overcome this, the surface has to be protected and this usually means bulking it up it with more DNA.’ This in turn reduces the sensitivity of the system – thin films are more discriminating than thick ones.

It appears that in haemoglobin the electron-sucking haeme centre is shielded by a deep protein coat, which prevents its interference with the electrode surface. It can, however, still withdraw electrons from the redox reporter. In laboratory assays the team showed that the sensor was at least 100 times more sensitive in the presence of haemoglobin than in its absence.

Experts are impressed by the study. Emil Palecek, a pioneer in the field of DNA electrochemistry at the Institute of Biophysics in the Czech Republic, says: ‘The reported 100-fold increase of sensitivity combined with low density DNA films opens the door for a new type of DNA–protein interaction analysis.’ The next stage, says Palecek, will be to see how efficient the new approach is with real biological samples.

Alon Gorodetsky, at the University of California, Irvine, says: ‘The clever use of haemoglobin as an electron sink, in conjunction with the improved sensitivity, raises the possibility that this sensor could be applied for the detection of biologically relevant concentrations of biomarkers – such as RNA, DNA, and proteins – directly from whole blood.’