Chemists in the US have shown that a class of hugely porous materials called metal-organic frameworks (MOFs) can have catalytic functions bolted onto the structure after it has been constructed to produce efficient catalysts that can be easily recovered and cycled many times.

MOFs are hollow lattices made from inorganic ’nodes’ connected by organic ’linkers’. Because they can be engineered across a wide range of architectures, the size and shape of the pores within the framework can be fine-tuned, making MOFs potentially useful ’cages’ for trapping or storing particular molecules. Their innate porosity also means that MOFs could be efficient supports for catalysts. However, incorporating catalytic activity into the frameworks has been challenging. So far most efforts have concentrated on using parts of the structure as the catalytic function - either the metal moiety or the organic linker molecules - but this approach has inherent limitations.

Now, Kristine Tanabe and Seth Cohen at the University of California, US, have shown that catalytic units can be bolted onto the framework after it has been built. This approach allows the architecture of the structure to be designed independently of the catalytic function. The researchers do this by taking a standard MOF and substituting the linker molecule with another molecule that is similar but that contains an amine group, giving it functionality. They can then attach a range of other molecules onto the MOF via the amine.

Tanabe and Cohen modified the amine-containing MOF with two different cyclic anhydrides, which, when incorporated into the MOF structure act as chelating agents for metals - they can ’grab’ and hold metal ions, in this case either copper or iron.

These metal sites are catalytic, as the researchers demonstrated by carrying out a particular carbon-carbon bond forming reaction with the new iron-containing MOF, demonstrating good efficiency and recovery of the MOF. 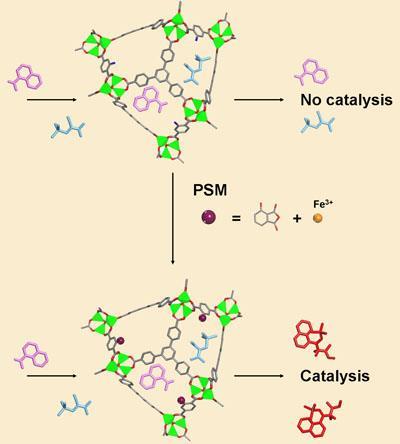 ’While post-synthetic modification [PSM] on MOFs has been known and demonstrated for many years, there has been something of a hiatus recently where no-one has looked really carefully at it,’ Cohen says. ’As far as we know, no-one has done the full gamut of modification, metallation and demonstration of catalytic activity. The major implication of our work is that we now have a way potentially to produce a new type of tuneable catalyst.’

Lee Cronin, who researches complex molecular architectures at the University of Glasgow in the UK, says that the work shows how MOFs might begin to fulfil their potential. ’You can start to envisage universal solids, where you can bolt on different functionalities to carry out the specific task you need,’ he says. ’It also raises the question of whether it would be possible to introduce two or more catalytic sites and do three or four transformations on one molecule - this is beginning to show what can be done with these materials.’